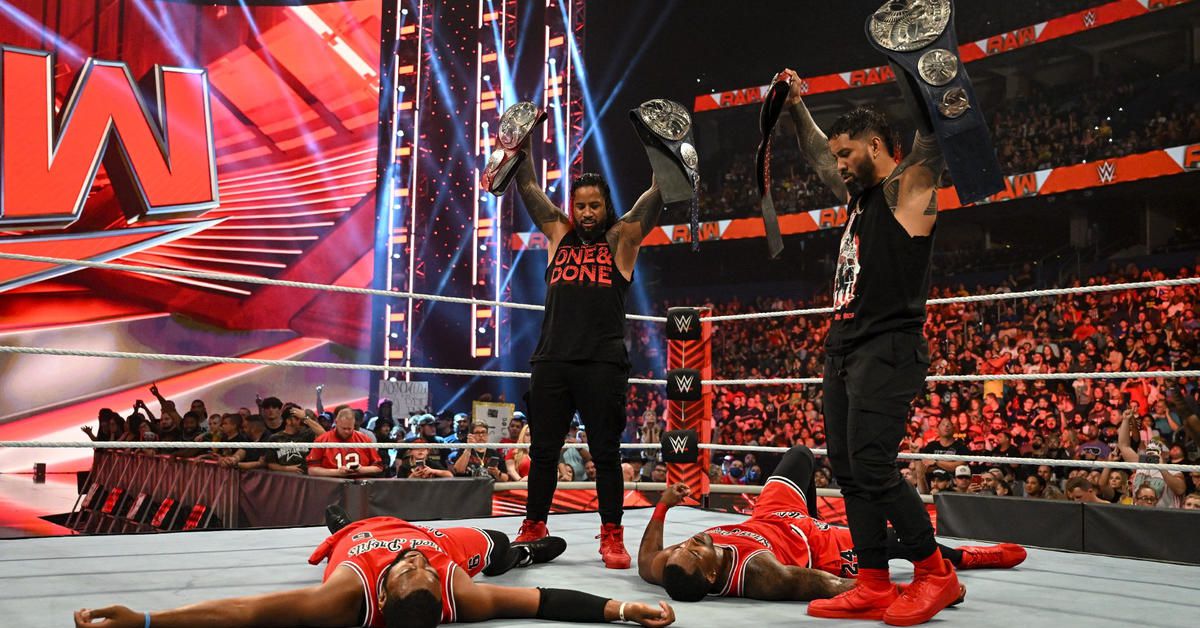 Everything eventually comes to an end. Well, almost everything. If Disney is successful, nothing will ever end, and my future children will enjoy the same pop culture staples that I enjoy today. But aside from the big global franchises, most things expire. This statement is also true in wrestling, as no one can truly “fight forever” despite how often fans chant or how loud those chants are.

Which brings us to the story of The Usos and The Street Profits. Two teams battle it out for WWE supremacy for what feels like an entire spring and summer. Their last battle Money in the bank knocked the whole house down and really looked like a battle of attrition. It was about which team made the first mistake and when the profits went down it looked like we had our answer.

In the end, Montez Ford and Angelo Dawkins were just victims of questionable officiating, as the referee ignored the fact that Montez’s shoulder was off the mat as he counted to three. And that’s why, ladies and gentlemen, we’re getting this revenge at Slam summer for the undisputed WWE Tag Team Championships. Oh, and that’s also why Jeff Jarrett is the special guest referee. I suppose? The Double J thing is weird and that’s probably the only time it’s mentioned in this preview. However, if he sings “With My Baby Tonight” in Nashville, then that’s a W for all of us. No, I couldn’t even type that with a straight face.

The fascinating aspect of this match is the contours of the suite. Usos’ rule is part of a larger story of Bloodline dominance. Can they still look dominant without tag titles? Sure. Will they look the same with just Roman Reigns holding a belt and a finger on Fridays and some Mondays? Not really. These four belts define the careers of Jimmy and Jey. Outside of New Day, they are the standard for WWE tag team wrestling, a constant for over a decade. It also attracts them to the tribal leader, because yes, Roman hates losing. The more excellence they earn and maintain, the longer they avoid the iron fist of Reigns’ mob boss. It’s not just ego that drives Jimmy and Jey; it is fear.

Fear also drives The Street Profits. Fear of falling short, fear of failing again, and fear that as a team, no matter how high Montez jumps, they may have hit their ceiling. Tez and Angelo have kept their focus on the championship belts all year. They took several hits at RK-BRO but never got the job done. They fought for their own relevance week after week, begging virtually every team in the division not to sleep on them. But at some point, the narcolepsy crept in because despite the close falls and great matches, these two keep failing.

Occasionally, they even seem to be on two different pages in two very different books. The fact that WWE planted breakup seeds a few weeks ago doesn’t help with team unity issues. Now those talks have collapsed after a week or two and with the whole company under new management, who knows what the current plans are. But it’s not hard to imagine this match as the Profits’ last fight. It’s really championships or a bust for them at this point.

One way or another, Slam summer is the end. Either the Usos keep and the profits walk different sides of the street, or Tez and Angelo end up getting rid of this monkey while Jimmy and Jey cop plead with their boss. Both teams come out in a blaze of glory at the conclusion of some of WWE’s best matches this year, and one hell of a story to boot.

This survey is closed