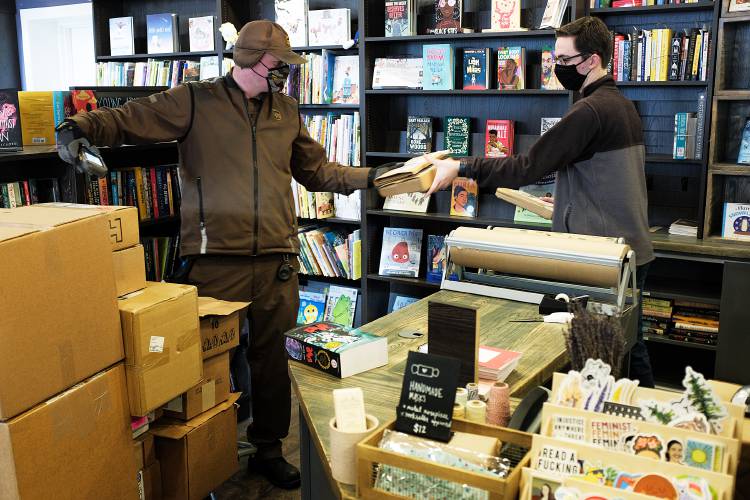 HANOVER – When the Dartmouth bookstore closed at the end of 2019, Allie Levy saw a business opportunity. Levy, a Dartmouth graduate in 2011, had worked in retail and publishing in New York and Denver, but was still looking for a way back to the Upper Valley. Less than a year after the bookstore closed, Levy opened Still North Books and Bar, an independent bookstore, cafe and bar in Hanover.

“I wanted to create this space to provide a (place) for people to come together, come and sit, read a book, have an experience, do a puzzle at our puzzle table,” Levy explained.

With so many facets to the business, Still North was not fully open and operational until February. For a month, business was going well. Levy had hoped that books and other merchandise would end up making up half of the income, with food and drink making up the other half; she was pleasantly surprised to achieve this 50/50 balance in the first month.

“Book sales have always been stronger than I imagined,” she said. “I underestimated how much people want to make sure there is an independent bookstore in Hanover.”

This would become essential when the pandemic shuts down Still North in March. Levy hadn’t planned on focusing on a website until the second year in business, but she quickly created one to fill and ship orders. Over time, Still North reopened for appointment sailing, and later for walk-in sailing.

Levy resumed selling coffee and baked goods, but did not revive sales of beer and wine. This part of the activity was aimed at college students, and with most students off campus and concerns about the virus lingering, Levy chose to halt alcohol sales. However, she hopes to serve again during the patio season in the spring and summer.

Fortunately, despite losing half of his income stream, book sales were able to cover the loss on the food and beverage side. At present, 90% of income comes from the sale of merchandise.

“Book sales have been way above what I expected,” Levy said.

She previously worked at a bookstore in Denver and thought she knew what to expect, but the Hanover community reads even more voraciously than expected, especially when she’s stuck at her home in quarantine.

“It’s New England,” Levy said. “We like to be comfortable and read books. Hanover is a truly intellectually curious community.

At first, Levy wasn’t sure what her clients would like to read, but learned that they were willing to try almost anything. This allowed him to take the risk of storing lesser-known books.

Currently, Still North Books and Bar does not sell any manuals, except for occasional special orders. Levy is looking to see if she would like to store textbooks in the future, but has yet to decide.

Despite the store’s successes even during the pandemic, it has been a trying year for Levy. Being a 31-year-old entrepreneur and launching her first business in 2020 was no small feat. But community support and networking with other independent bookstore owners helped Levy meet the challenges.

In early January, Levy took time off, returning to a curbside pick-up model to give him and his seven employees a bit of a break, allowing them to focus on projects such as cleaning and cleaning. ‘inventory.

“We have had a very busy holiday season, and we all found ourselves, with the news and COVID, in need of a little break,” she said. “It allowed us to catch our breath.

With the resumption of vaccination efforts, Levy is aiming for a somewhat quieter second year than the first.

“I hope we have the opportunity to learn what a bookstore, cafe and bar is like in Hanover when there is no pandemic,” she said.

“A lot of the concept testing that takes place in the first year of operation, it was drastically different for us. I can’t wait for this space to be used for what we envision it.

This story is part of a series shared by the partners of The Granite State News Collaborative, which aims to highlight how business leaders in the state have adapted to meet the challenges and disruption caused by the novel coronavirus. For more information, visit collaborativenh.org.