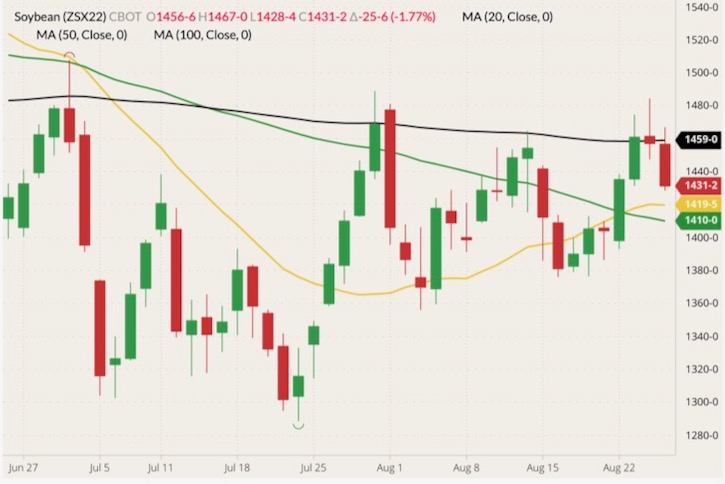 Chicago | Reuters — Chicago Board of Trade soybean, wheat and corn futures fell on a profit-taking reversal on Thursday after rebounding earlier in the week, traders said.

“We’re just encountering a bit of technical resistance across the board,” said Dan O’Bryan, risk management specialist and broker at Top Third StoneX. “You have to feed the bull every day.”

Corn losses, which had posted gains in the previous six sessions and hit their highest level in nearly two months on Wednesday, were limited by worries about possible crop shortfalls in the US Midwest.

Chicago Board of Trade November soybean futures settled 25-3/4 cents higher at $14.31-1/4 a bushel (all figures in US dollars).

“We got a decent sell, helped and abetted by the market charging headlong into chart resistance,” Charlie Sernatinger, global head of grain futures at ED+F Man Capital, said in a note to clients. .

Bumper crops in the United States are needed to make up for weak global grain supplies, but extreme heat and widespread drought in parts of the Midwest have hampered fields and a string of crop failures around the world point to several years of hardship. tight supplies and high food costs.

Egypt, one of the world’s biggest wheat importers, reportedly made no purchases of imported wheat in talks with trading houses on Wednesday, traders said. The General Authority for Supply Commodities felt the proposed prices were too high, they said.