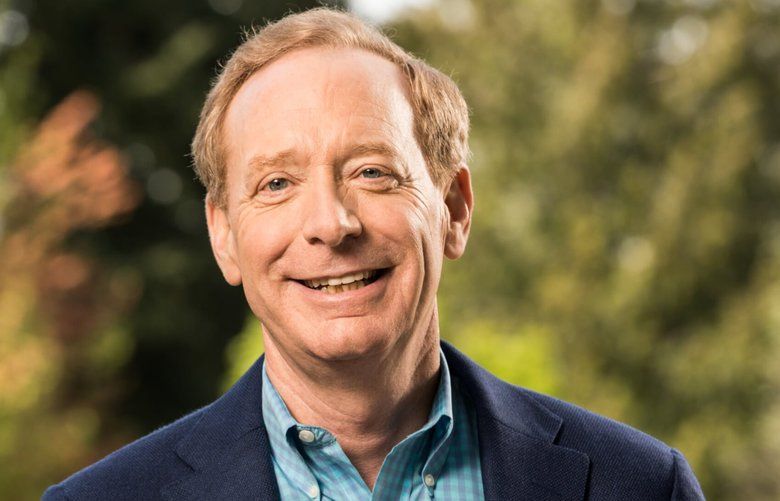 If data is now the most profitable commodity of the 21st century, it is also fast becoming the one with the highest political and social risks.

Increasingly, our most pressing real-world crises — from election hacking and virulent nationalism to livestreamed mass shootings and digitally driven job losses — center on some new use or misuse of data technology, and the tech giants that released it into the world.

For decades, those firms downplayed their obligation to confront these data-saturated problems.

But that position is no longer defensible, argues Brad Smith, president of Microsoft and co-author of a timely new book, “Tools and Weapons: The Promise and the Peril of the Digital Age,” which publishes Tuesday.

“When your technology changes the world,” Smith writes, “you bear a responsibility to help address the world you have helped create.”

In “Tools and Weapons,” Smith and co-author Carol Ann Browne, make a persuasive, pragmatic case for owning that responsibility, in everything from digital privacy and surveillance to cybersecurity and social fragmentation to artificial intelligence and facial-recognition technology.

Smith calls for a “coalition of the willing” between the tech sector and governments, as well as among rival tech companies, to work to ensure that data technology’s many benefits are not ultimately outweighed by its potential costs. “Tools and Weapons” is an insider’s view on why this new approach is necessary, and what a more collaborative approach might look like.

Smith’s pleas for collaboration will strike some longtime Microsoft watchers as hollow: Smith helps run a tech behemoth that spent years brutalizing rivals and waging legalistic warfare with governments, . And make no mistake, Smith’s action plan wouldn’t derail the corporate strategy at Microsoft, with its multibillion-dollar stake in the continued expansion of the data economy and the continued penetration of data into every aspect of our lives.

But that multibillion-dollar stake is part of what is driving Microsoft’s kinder, gentler strategy: absent a more effective approach to our data-driven crises, the commercial cloud business that Microsoft has bet its future on (and is already getting a third of its revenues from) looks a lot less certain.

Further, as Smith acknowledged in an interview, tech firms like Microsoft know they aren’t the only players eager to change the way data is managed.

In the aftermath of such digital controversies as Russian election interference, or such horrific tragedies as the March 15 Christchurch mass shooting, which was livestreamed on Facebook, many tech companies recognize that they must either help develop a new approach to data regulation or risk being overtaken by political momentum.

“In the wake of the Christchurch attack, we’ve seen [proposals to regulate online data] move from New Zealand to Australia up to the United Kingdom, to continental Europe,” Smith said. For that reason, he added, a major shift in the way data is regulated “is not only necessary, but it is rapidly becoming a global political inevitability.”

And one problem, Smith said, is that many of those governments now pushing for a better, safer, more equitable data economy are woefully out-of-date about what it takes to regulate these rapidly evolving data technologies.

“Governments need to move faster,” Smith said. “We ultimately are big believers in a world where [tech] companies are accountable to governments, not the other way around. But for that to work, we need governments to understand these issues and do more to address them.”

“Tools and Weapons” is a tour of the data battlefield that tech firms and governments are now scrambling to manage.

After opening in Microsoft’s vast, highly secure data centers in Quincy, Grant County, it takes readers through a series of incidents and crises that demonstrate just how hard it is now, for companies, consumers and countries, to keep data from being misused.

Readers will quickly realize that Microsoft has been on the front lines in most of today’s biggest data-driven controversies, whether that be the surveillance tactics of the US government’s war on terror, North Korea’s cyberattacks, or the lack of broadband access in many rural American communities.

But readers will also see that a while front-line role has been enormously profitable — Microsoft’s now boasts a world-leading market capitalization of $1.2 trillion — it is also fraught with risk.

To take one example, Microsoft’s massive cloud business exposes it to constant, aggressive demands from US and other governments for access to that data for terror and criminal investigations — demands that, if mishandled, could hurt Microsoft’s reputation as a safe haven for data.

Yet, paradoxically, government inaction also poses a risk, Smith said, especially when it comes to the generally slow policy responses to cyberwarfare, facial-recognition technology, and other rapidly emerging data-driven innovation.

Smith doesn’t miss the irony here: he is urging governments to “move faster to catch up with the pace of technology” even as tech firms like Microsoft intentionally drive that pace to disrupt sectors, beat rivals and win market share.

This is a sector, Smith writes, that has “long focused obsessively on rapid growth, and sometimes on disruption as an end in itself.” Smith candidly points to the tech-sector strategy known as “blitz scaling,” or the “notion of a lightning fast effort to globalize a product and win over a new market segment as quickly as possible” — and then insists that such strategy remains “ a goal and even a need in the world of technology.”

But Smith also believes tech firms must find ways to manage the negative social effects of that rapid growth. “We need to move fast with guard rails,” he said.

As an example, Smith thinks social-media companies could make it easier for users to know the source of the data they’re getting online. The goal, Smith said, is for citizens to “have more information about who is speaking when they’re reading things on the internet, so they know whether it’s a human being who’s speaking or bot that is just generating and spreading commentary and the like .”

Still, Smith is reluctant to throw out the legal protections, such as the Section 230 of the 1996 Communications Decency Act, which have largely shielded tech platforms from liability over even egregious content on those platforms. Critics say laws like these have encouraged some of the more toxic aspects of social media.

But “if you simply abolish section 230 of the Communications Decency Act, you could just create the kind of havoc that potentially could strangle many of the social media and other services that are fundamental to people’s lives today,” Smith said.

“We don’t want to do that,” he adds. “We need to address this with a scalpel rather than a meat cleaver.”

Skeptics will read such cautious caveats as part of the tech sector’s larger strategy to avoid any new regulation that threatens profitable growth.

But in truth, tech firms may have less sway over that process than they did in the data revolution’s early years.

Certainly, the aggressive, winner-take-all tactics that served Microsoft and tech’s other near-monopolists in their growth stages are supremely ill-suited to the massive, and massively complicated, data economy of today.

Simply put, to succeed in an era of cyber warfare, viral hoaxes, and data-fueled inequality, Microsoft and its peers know they need help from the very regulators and politicians they have spent decades trying to foil.

In fact, for the tech sector, the larger question about managing the data economy isn’t whether to partner with government, but rather, which governments are ready to get to work, and which are unable or unwilling to take the initiative.

“The reality is that even if the United States Congress does nothing [on data regulation]which is always a distinct possibility today, so many other countries will move forward that tech companies will be forced to change,” Smith said.