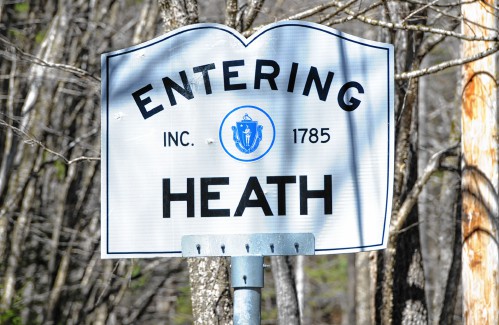 HEATH – Voters will decide the outcome of two contests in the annual municipal election ballot on Friday.

Freeman, 84, and his wife, Margaret, have lived in town for 20 years. He was chair of the finance committee for nine years.

He is a retired professor of English and linguistics who has taught at the University of Massachusetts Amherst, Temple University, and the University of Southern California, among other colleges. At UMass Amherst, he was Associate Dean of Humanities and Fine Arts. Earlier in life he was a reporter for Rhode Island’s Providence Journal.

“I think the (city) library should be able to use any available space for library services,” he said. “That includes the old school library.”

He said the old school library is a good place for children’s books. He also thinks Sawyer Hall Library should be Americans with Disabilities Act (ADA) compliant.

Freeman strongly believes that libraries should be “unfettered by ideology.” Referring to the banning of books in some parts of the country, he said: “Libraries must be examples of open and free enquiry.”

Gruen, a resident of Heath for 47 years, lives next to the library, “which has a deep place in my heart”, he said. Gruen, 75, was a teacher for 40 years, including at Rowe Elementary School and the now-closed Butterfield School in Orange.

“A big part of my teaching was reading to children,” he said. Gruen still reads to children as a volunteer at Buckland-Shelburne Elementary School, and he reads to people with disabilities through a program called Learning Ally.

Gruen is a friend of the library and served on the school board for the Mohawk Trail Regional School District for 20 years. He served on the Franklin County Technical School Committee for three years. He has also served on the Planning Board, Zoning Appeals Board, Heath Primary School Building Committee and Heath Regionalization Review Committee. He was also a Heath firefighter for 35 years.

When asked if he thought the library should be in a bigger space, like the old school building, Gruen said, “I think there’s a history and a great love for the library here in the city center. Gruen said it might be possible to “share space and resources between the two libraries” – the town library in Sawyer Hall and the children’s library in the old school building.

Cronin Fisher spent many years in Heath town government and would like to return to the finance committee, a board she had served on for six years previously.

“I’ve really missed being part of city government,” said 71-year-old Cronin Fisher. “I think I’m good at it and I want to help everyone here.”

While serving on a former finance committee, Cronin Fisher served as the board’s liaison with the Mohawk Trail Regional School District. She also worked on the Heath School Task Force, which studied the closure of Heath Elementary School, and said she would like to see the old school building used better than as a space for city ​​offices.

“I think the city offices were fine in Sawyer Hall, partly because not everyone uses it at the same time,” Cronin Fisher said. “I don’t see how it benefits the townspeople to move the town offices to the old school.”

Cronin Fisher said she would like to find a way to use the building to bring revenue to the town. She feels that the cost of maintaining the school building is too high, given the size of the government in a town of 700 people. She said the 27-year-old building could soon require costly repairs, such as replacing the roof. “I’m concerned about how we’re going to get the money,” she said.

Wozniak is the outgoing finance committee member seeking a second term on the board.

Wozniak, 51, is an assistant assessor at Heath and Leiden. At Colrain, she is the Director of Appraisers as well as that town’s clerk to the conservation and zoning boards, the fire department and the building inspector’s office.

During her first three-year term on the finance committee, she said, city assessments went up while the tax rate went down $1 from the year’s rate. latest. It’s now $21.52 per $1,000 valuation, she said.

If re-elected, Wozniak said she would like to see the city spend its money “more wisely.”

“We spend on things that other cities don’t,” she said.

Asked if she thinks Heath should repurpose her old primary school for city offices, Wozniak said she’s seen more residents come to see her in her office at 18 Jacobs Road than she realizes. was doing when his office was in the historic Sawyer Hall building in the center of town.

“That’s because a lot of older people couldn’t climb the stairs and didn’t want to get in the elevator,” she said. “All buildings have a use, but I think some uses are expiring or obsolete,” she added, pointing to the flooding and plumbing issues at Sawyer Hall. She said a historic building can have a different use, such as becoming a museum or a store, and still be useful to the community.

The following candidates present themselves unopposed on the ballot paper:

No one has filed for the school board seat currently held by Barbara Rode, who is not seeking re-election for another three-year term.