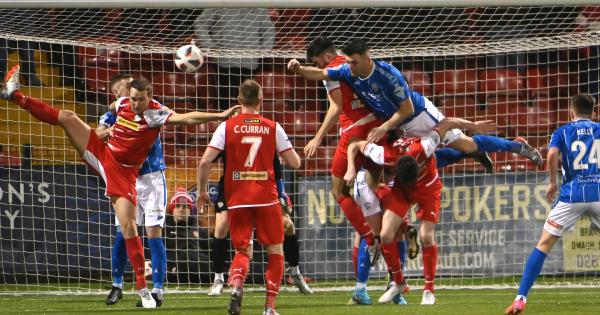 The director balances the accounts before the big game

COLERAINE manager Oran Kearney says he accepts responsibility for Tuesday’s 1-0 loss to the Crusaders after fielding an unknown four.

The Ballymoney man was forced into a reshuffle as a number of players entered the game one booking a suspension.

And with a League Cup final against Cliftonville coming up on Sunday, the Bannsiders boss didn’t want to risk players missing out.

“I will take responsibility for that because we probably have three out of four backs playing in positions they don’t normally play in,” he said.

“I think all four did extremely well relative to the conditions, the environment and everything they were invested in.

“Unfortunately, and it’s rare that we are in a scenario like this, but we have to protect and take care of the players.

“Cup finals are hard to come by, they are big events that people enjoy and get a lot out of.

“I would find it hard to live with myself for putting someone out of this by playing them or putting them in a scenario where they risk getting a yellow card.

“We just couldn’t do that and it wouldn’t have been fair.

“Rodney Brown came on for 15 minutes and my only instruction was not to touch anyone and the instruction given to James McLaughlin was exactly the same.

“It’s surreal because while you’re dealing with all of this you’re also trying to pick up points to move up the league,” he added.

As for the game itself, Kearney thought his team had done enough to take something out of the game.

“We said it after the game that it’s rare that we come here and have as many chances as we have created.

“We’ve had good results here over the years, but a lot of the performance has been flawless.

“We created more than enough chances, but unfortunately we encountered an inspired keeper.

Thoughts now turn to Sunday and a fifth game of the season against the team’s nemesis, Cliftonville.

“We are extremely excited,” admitted the boss.

“Big games on Tuesday, like last Friday, we create chances and play well but it’s just a stretch of time that costs us a lot.

“We just have to work out those little details and make sure that doesn’t happen.

“We are all looking forward to the event, we can’t wait. It’s a different Sunday, obviously there’s going to be a big crowd which is awesome.

“We’re excited about it and can’t wait to give it a good rattle.

“We have a load of tickets sold and everything.

“My great memories of all the cup finals we have played over the years, even the one we lost to Linfield before winning the next two, the fans were outstanding and brilliant.

“Particularly up there, it’s a big environment, we need the noise and we need the players to buzz about it.”