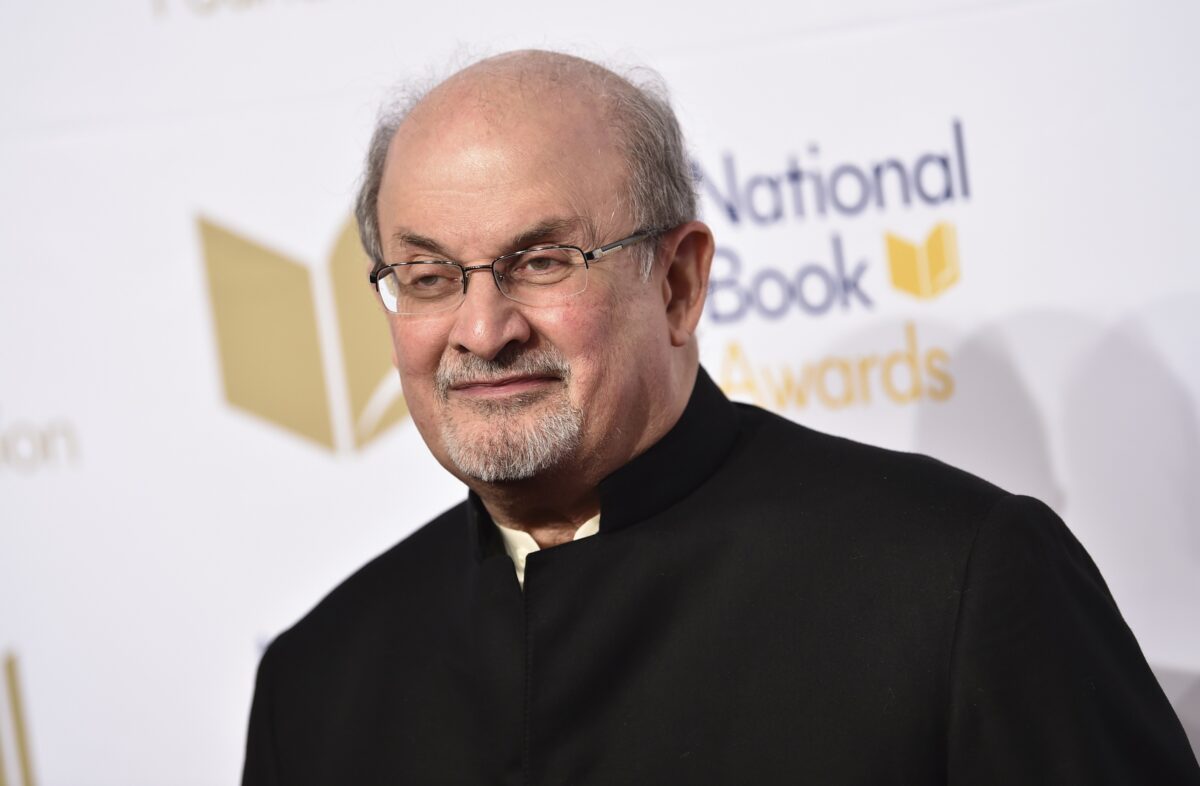 Sales of Salman Rushdie’s controversial 1988 novel ‘The Satanic Verses’ surged in the days after the Indian-born writer was repeatedly assaulted and stabbed in New York state on August 12 .

Readers have bought the novel in solidarity with the gravely injured author, even as the Iranian regime, which has called for his assassination, is stepping up its inflammatory remarks at his expense.

The 34-year-old novel peaked at number two on Amazon for fiction paperbacks in the aftermath of the attack.

The attack follows a decades-long controversy over ‘The Satanic Verses’, which takes its name from an incident in which the Prophet Muhammad allegedly confused the word of Satan with divine revelation, prompting him to add now redacted verses in the Quran.

While the historicity of these verses is disputed by devout Muslims, they serve as the basis for a series of dreamlike sequences in Rushdie’s novel, which ruffle not only his allusion to the titular verses but also the mention of the prepubescent age of the Prophet. wife Aisha.

Following the novel and its alleged blasphemy, Iranian cleric and Supreme Leader Ayatollah Ruhollah Khomeini issued a fatwa on Rushdie in 1989, calling on pious Muslims to assassinate the writer who was also an outspoken critic of Islamic extremism.

Rushdie then lived in hiding for several years, and although he escaped the 1990s physically unscathed, there were multiple assassination attempts against people associated with the translation and publication of the novel, including an attempted successful assassination of Japanese translator Hitoshi Iragashi.

Although the Islamic Republic of Iran issued a statement of reconciliation with the author in 1998, the regime has largely adhered to the terms of the fatwa, insisting that it is technically irrevocable, as a fatwa cannot be lifted. only by its original author – and since Khomeini died in 1989, there is no way the fatwa will be lifted.

Dr. Yass Alizadeh, an Iranian-born scholar in New York University’s Middle Eastern and Islamic Studies department, believes that the new surge in sales of “The Satanic Verses” highlights how elements within of the Tehran regime signaled approval of the assassination attempt. , implicitly or explicitly endorsing the attack on the now 75-year-old novelist.

“It is important to mention that Iranian government officials and elites did not hesitate to express their approval of the [attempted] assassination,” Alizadeh told The Epoch Times.

“Right after Rushdie’s [attempted] assassination, Mohammad Marandi, a former chair of North American studies at the University of Tehran, an adviser to Iran’s nuclear negotiating team and a US citizen himself, tweeted that he “will not pay no tears for a writer who arouses endless hatred and contempt”. for Muslims and Islam. A pawn of the empire posing as a postcolonial novelist.’”

Despite the jubilation of Islamic Republic government officials, Alizadeh believes there is broad support for Rushdie and other critics of religious dogmatism among the Iranian people and elsewhere, even though the novel is officially banned in the Republic. Islamic.

“In the wake of Rushdie’s assassination attempt, Iranians whose access to social media platforms are banned by their government, have taken to Twitter and Clubhouse to express their support for the author whose books are banned in Iran. “said Alizadeh, noting that the incident comes soon after. an assassination attempt on Iranian expatriate and regime critic Masih Alinejad, who lives in exile in New York.

In a certain sense, it is not surprising and banal that the attack causes a drop in sales of the novel at the heart of the controversy. A saying attributed to PT Barnum states that “all publicity is good publicity”, and the attack certainly had the effect of bringing a decades-old novel back into the public consciousness. With the name of the book once again featuring prominently in the news headlines, it makes sense.

However, murmurs of approval for Rushdie in parts of the Muslim world may suggest that the units of “The Satanic Verses” sold recently represent a gesture of solidarity with the beleaguered novelist.

“This purchase was in support [of] Freedom of thought and expression. No one has the right to take anyone’s life because they don’t like what they say or write,” writes Amazon reviewer “nuyorican” in one of many customer reviews supporting the author’s right to speak without fear of violence.

The author’s condition has apparently improved since the attack, and Rushdie was reportedly taken off a ventilator several days after the incident. Although the author appears to be on the mend, the assault is a reminder of the many who wish him harm for his art and a sobering reminder of the dangers faced by outspoken intellectuals.

Nicholas Dolinger is a business reporter for The Epoch Times.