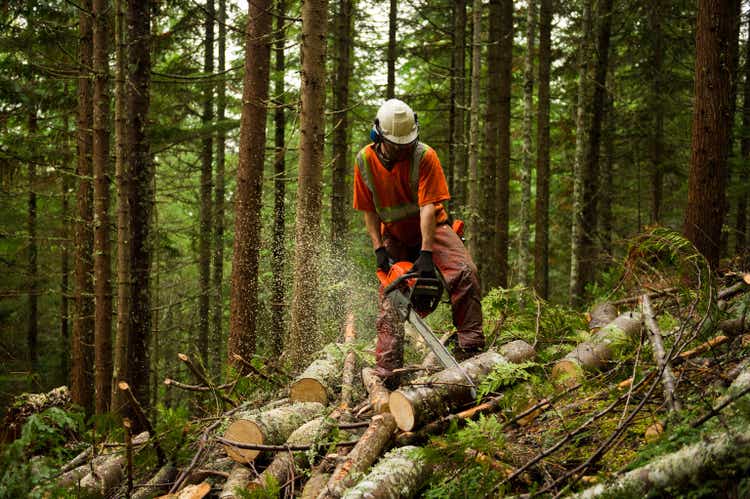 Resolute Forest Products” (NYSE: DP) the stock jumped more than 60% on Wednesday, July 6, 2022, after news that the company had reached an agreement to buy out Canada’s Paper Excellence Band. The analysis below provides an update of my previous strong buy rating and explores the deal’s potential synergies and what it means for investors.

I started my research on RFP at the end of 2021, as the company was in the right direction of its transformation plan, significantly deleveraged its balance sheet and increased its profitability. However, the stock provided a better entry point in early 2022, and following my latest update, I opened a long position in the model portfolio.

My initial target price of $19.40 was based on the company’s weak Price/Book multiple, while signs of operational improvement and gains from the company’s restructuring plans were relatively evident. Unsurprisingly, five months later, I ended up recording 81% profits and quitting my entire RFP position after the news. Below, I explain why investors should also consider at least reducing their position.

Under this agreement, Domtar Corporation, a wholly-owned subsidiary of Paper Excellence, will acquire all of the outstanding common shares of RFP by paying its shareholders $20.5 per share, valuing the company at around $2.7 billion. At a premium of around 64% to RFP’s closing price the previous day, this appears to be a lucrative transaction in favor of the company and its shareholders. In addition to the cash consideration, the agreement also provides shareholders with contingent value rights (“CVR”) for expected refunds of approximately $500 million paid by RFP in the form of softwood lumber duty deposits. through June 30, 2022. The board has unanimously approved the deal, and shareholder and regulatory approvals are expected to be completed in the second half of the year, closing the deal in the first half of 2023. RFP will continue to operate as a stand-alone business unit after the acquisition.

Shareholders should consider the deal done

It is reasonable to expect that the transaction will be successfully concluded within the suggested time frame since the owner of approximately 40% of RFP’s shares, Fairfax Financial Holdings, has already backed this agreement. In addition, no major regulatory constraints are expected since there are little overlap in geographical presence of the parties concerned.

What are the potential synergies?

Paper Excellence is a Canada-based holding company that manages businesses related to pulp and paper manufacturing. In November 2021, it completed the acquisition of Domtar Corporation as part of its growth strategy to enter the US market. Domtar is a supplier of fiber-based products, with 70% of its revenues coming from uncoated freesheet and the remainder from the sale of market pulp.

By the end of 2022, Domtar also aims to enter the packaging market. The acquisition of Resolute brings diversification benefits to Domtar; RFP’s lumber business will reduce Domtar’s reliance on its free sheet sales. On the other hand, RFP will continue to implement its growth strategy for its wood products business. Being part of a large private group, Resolute will have access to capital and tools to make appropriate acquisitions in the lumber and pulp sector as well as to expand in other avenues.

For example, as part of the deal, Paper Excellence Group has also committed to conduct a feasibility study on the potential conversion of Resolute’s newsprint mill in Gatineau, Quebec, into a packaging plant. . Assume Domtar successfully enters the packaging business by the end of 2022. In this case, Resolute will have access to technical resources as well as an established network to grow in the new business. Moreover, increasing investment for strategic initiatives aimed at entering new markets is generally easier for private companies than for companies that have to convince public investors.

What should investors do?

Now for the big question, what should investors do? Undoubtedly, the stock has captured its upside potential, and there is little to no chance of another bull cycle in the near future. A more lucrative competitive offer is highly unlikely. There is a good chance that the stock price will deviate by around $20.5 unless some major news occurs that may portend a disruption in this merger process, the odds of which are low. . RFP’s stock price would follow the same trend as Domtar’s stock after the announcement of the acquisition in May 2021; when the stock peaked at $55.5, the supply remained at the same level until the acquisition was completed in November.

Thus, investors can decide either to close their position and capitalize on the rise, or to hold their position until their shares are purchased at $20.5. In the event that an investor holds the shares until completion of the transaction, they will be entitled to a CVR, in which case they will be able to obtain a share of the estimated softwood lumber duty refund of approximately $500 million. dollars that Resolute has paid in the United States.

According to a TD Securities analyst, the value of this CVR could be $3.98 per share if the company obtains reimbursement of 80% of its deposits within the next two years. However, this refund is conditional on the resolution of the ongoing softwood lumber dispute between the United States and Canada. The United States imposes anti-dumping and countervailing duties on the importation of certain softwood lumber products from Canada. This dispute has been going on since 1982, with the latest set of disputes remaining unresolved since 2015. The dispute settlement process is ongoing at the WTO. However, the terms and timing of a possible resolution remain unknown. Therefore, I would not bet on the potential benefits of CVR.

Given the uncertainty of the CVR of $3.98 per share and the current volatile market conditions, RFP stock has already realized most of its upside potential. Therefore, I have already booked profits at $20.52 per share, using my proceeds for my next potential target.