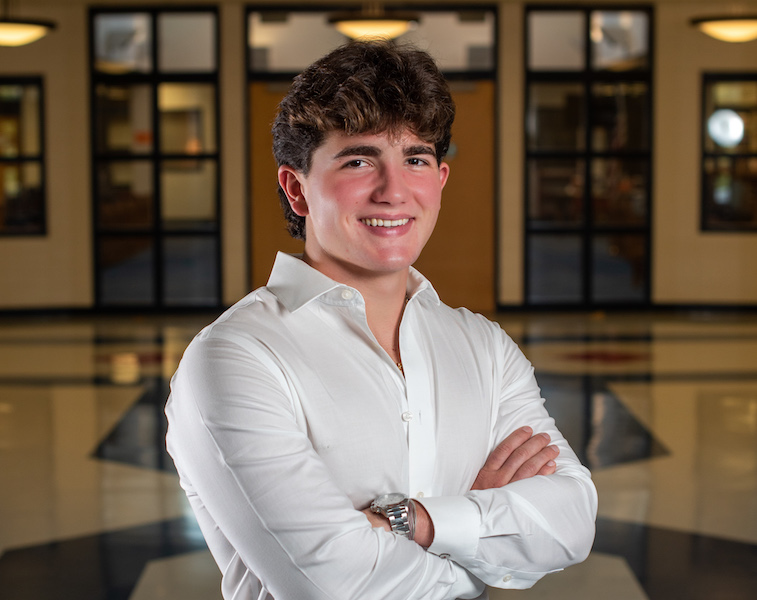 With three to six months to live, Pete Anella looked for signs of hope as he sat inside the MD Anderson Cancer Center. Then it came.

At that time, Pete was pleasantly surprised when a woman came in with slides for each of the patients sitting next to her during a chemotherapy session. This two-minute interaction then changed everything.

Pete lived a year longer than expected before passing away on December 5, 2019, but those two minutes marked him for the rest of his life. As he took his turn on a slide, a dark and lonely place was quickly filled with joy. As he beamed a grin from ear to ear in his lively way, he realized someone cared. Someone was thinking of him and wanted to put a smile on his face.

Most importantly, the story of that moment stayed with her son Peter.

“Cancer is like a 9:00 to 5:00 job,” Peter says, thinking of his father’s struggle. “You go, do tests, do chemo, talk to doctors, but those two minutes were kind of a break. He talked about it for so long that I started thinking about it a lot after he died.

With that in mind, Peter set out to make his dad proud and with a new way to bring joy to those battling cancer: The Cool Cat Club.

As a junior at Oak Mountain High School, Peter accelerated the creation of a new nonprofit that would change the lives of cancer patients, with his father serving as an inspiration as the Original Cool Cat. But even before helping others, his first impact was actually helping Peter deal with the loss of his hero.

“My dad was definitely my biggest role model. He taught me all the values ​​I have,” says Peter. “He always said, ‘The only limits are the ones you put on yourself. You really can do anything. whatever you want. If you really work at it, you can do it. He came from nothing and built an amazing life and family. I hold that to be true and I live by that. He always said it was good to be nice. He taught me to be nice to everyone.

Since being first diagnosed with laryngeal cancer in 2015, Pete has remained positive and determined to live his life as normal, and he even went into remission for a short time. But in 2018, Pete was re-diagnosed, and this time the cancer was in his lungs. He ended up with aggressive squamous cell lung carcinoma which is a very difficult cancer to treat. Soon after, he only had three to six months left to live.

“Being the kind of guy he was, he ended up keeping everyone positive and upbeat when he was the one who really needed it,” Peter says. “Even at the grocery store, he knew everyone and always made jokes with each one of them. That’s who he was.

And during that time, Peter was able to spend some of the best times with his dad.

“Mindset and attitude are everything. There’s a quote I’ve read in the middle of everything that was going on that said, ‘Unhappiness doesn’t come from the situation; it comes from the attitude to the situation,” says Peter. “It really turned everything upside down for me. This challenge that came up in our family’s life only seemed bad because it was the easiest thing to look at. In life, there are two sides to everything, a good side and a bad side. I decided to look at the good side.

Pete ended up living 15 more months, opening up space for their family to travel and make memories together. Rather than going down a dark path at this point, Peter channeled his energy into something that not only makes his father proud, but helps others in the process.

Watching a live stream from inside Grandview Cancer Center, a woman receiving one of her chemotherapy treatments couldn’t resist the urge to get up and walk outside to be a part of what’s happening. passed.

Just outside stood Peter and his three friends who helped start the Cool Cat Club. It was their first care package at the cancer center, and the woman was overwhelmed with joy.

“Some of the nurses and doctors had already come out, but while we were sitting there a patient on chemo came out and told us how excited she was because it was so needed,” Peter says. “From day one, it was shocking. We knew we were creating something useful and necessary.

The day was August 8, 2020. It turns out that Peter, who was also up for valedictorian in his senior class the same year and ran an Italian clothing company he started, COVID-19 hit and quarantine gave him the time he needed to keep the club going.

How did he find the means to launch it? Sale of old childhood toys. From there, he and his partners, including best friend Hall Welborn, began calling hospitals to see if they could even get in.

A phone call to the chief of oncology at Grandview Medical Center was enough. “She’s hardly ever in her office, but she happened to be there when we called,” Peter says. “

And it certainly wasn’t going to be a one-time project – they had big dreams of providing care packages and helping cancer patients financially. From there, the group finalized all the legal work necessary to become a 501(c)(3) and had a logo created, all relying on the know-how of the young entrepreneur. Unsurprisingly, he raised over $50,000 in one year.

“For me personally, I became passionate about it very, very quickly, seeing the impact it has on the lives of these cancer patients, seeing these people struggling and putting a smile on their face,” says Lobby. “Every time we go to hospitals, the doctors get so excited and say, ‘Oh my God, the Cool Cat Club is here. They see caring young people. That’s all the payment we need for something like this. It’s so fulfilling. People talk about work, and if you don’t like what you do, why do it? It’s something I want to do for the rest of my life.”

Standing in front of 397 of his classmates inside Heardmont Stadium on May 26, 2021, Peter began to speak and the audience’s jaws dropped. Through his words, the Oak Mountain valedictorian took people on a lesson tied to each year of high school. He guided people through his clothing business, his father dying of cancer, his newfound charity, and his ultimate lesson in accomplishing whatever you set your mind to.

“I’ve always been a businessman before I even knew what an entrepreneur was,” says Peter. “Even in first grade, I remember dressing up in a suit and being a businessman.”

This was the goal Peter set for himself, and while he read books about it for a while, he eventually took the plunge and was a living example of his achievement.

The hardest thing to do in life is find what excites you, says Hall. But not for Peter. He always knew what fascinated him.

Hall also points out that starting a nonprofit at a young age allowed the group as a whole to grow faster and learn who they were. “I learned a lot from it and matured a lot,” he says. “It started in the middle of the pandemic and then we went back to school and I’m sitting in algebra class like, ‘Why am I doing algebra right now when I can do something thing that makes a difference?'”

Today, Peter is a student at Princeton University, and if he didn’t already have enough on his plate, he’s joined the rugby team, the entrepreneurship club, the real estate club, and introduces himself. in the elections, while taking courses in one of the most prestigious universities in the country.

But one of his top priorities remains carrying on his father’s legacy with The Cool Cat Club wherever he is, with home base Birmingham remaining. “I didn’t realize how many people were affected by cancer. Whether it’s family, a friend or someone else, everyone has experienced it in one way or another,” says Peter. “So it’s really special to be able to make a difference. It’s the whole point of the Cool Cat Club to make them smile a little bit more, and we have no intention of giving up on that.

Learn more about the Cool Cat Club at thecoolcatclub.org.