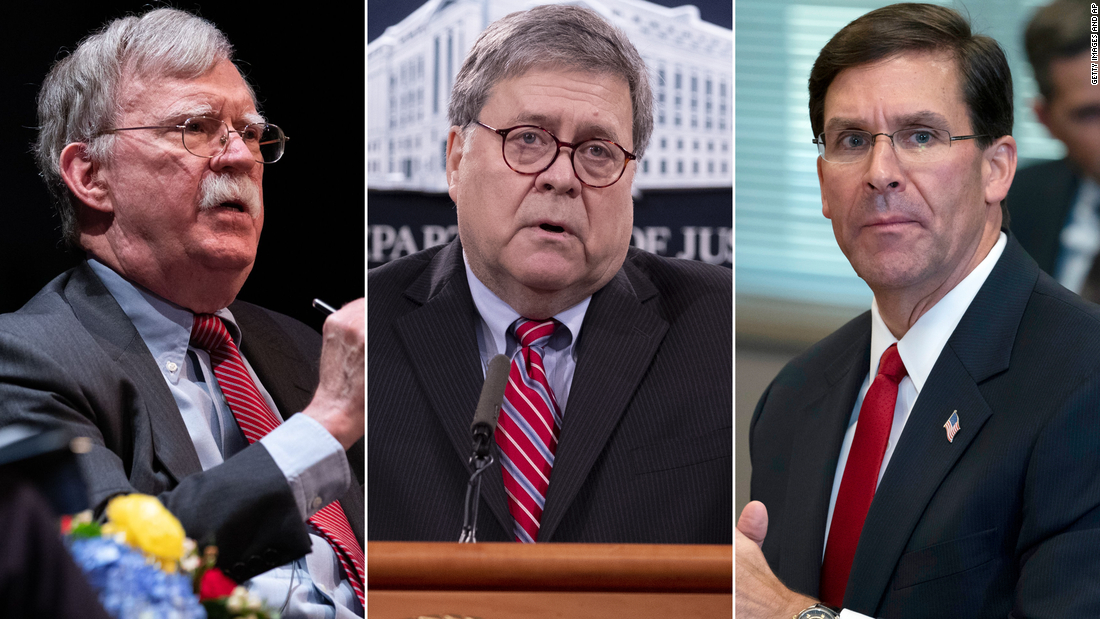 Opinion: Trump officials whose silence put book sales ahead of the country

These revelations, part of Esper’s recent tell-all book, “A Sacred Oath,” raise an obvious question: If Trump was insinuating even such reckless ideas, why didn’t Esper speak up sooner?

In the end, the American people found themselves further divided into warring camps. On one side stood millions of people who accepted his unsubstantiated claim that the 2020 election was “rigged” – and who believed that political and media institutions were out to nab the former president. On the other were those who dismissed that claim and remained appalled by Trump’s record of bullying and pomposity.

The result? A nation bitterly polarized and largely paralyzed by its differences.

Esper served the Trump administration from almost the beginning until almost the end of his term – first as Secretary of the Army, then as Secretary of Defense. He writes in his book that he was aware of Trump’s efforts to withhold the transfer of military aid to Ukraine until Ukrainian President Volodymyr Zelensky gave him political dirt to use against his likely adversary. of 2020, Joe Biden (an allegation Trump has repeatedly denied).
Although Esper told CBS News that he continues to press Trump to release aid to Ukraine, he did not share full details of those efforts with Congress at the first. dismissal of the former president.
Could Esper’s confirmation of the allegations have helped the case of the House impeachment officers? Well, at the time of the hearings, Esper was the highest-ranking civilian in the Pentagon. His confirmation of testimony offered by people like then-National Security Council officials Lt. Col. Alexander Vindman and Fiona Hill could have provided political cover for Republicans to vote to impeach and convict Trump. But he said nothing, and Trump was eventually acquitted in his first trial.
Esper was not the only Trump official to withhold critical information which he later included in a book. Former national security adviser John Bolton, in ‘The Room Where It Happened’, wrote not only that he knew Trump was trying to leverage aid to Ukraine, but that Trump was also actively trying to get Bolton’s help to build a pressure campaign on Ukraine. (Trump denied giving such orders to Bolton.)
Yet few foreign affairs pundits are more respected by Republicans in Congress than Bolton — and his word could have pushed some of them toward impeachment. When the House committee investigating the impeachment asked him to testify, Bolton refused to speak without a subpoena – saving what he knew for his book, which was published months after Trump celebrated his acquittal at a rally at the White House.
In Trump’s second impeachment trial, it was former attorney general William Barr who could have played a decisive role. As Barr would eventually write in his book, “One Damn Thing After Another,” “In the final months of his administration, Trump cared about only one thing: himself. plan.” Writing long after Trump stoked the anger leading up to Jan. 6, Barr recalled that in the weeks following the 2020 election, Trump was “beyond restraint” and “reasoning with him was hopeless.” .

Given Barr’s loyalty to Trump, no one could have dismissed him as a knee-jerk adversary had he offered his assessment of Trump’s state of mind. Given his cabinet status, had he signed an affidavit testifying to Trump’s post-election priorities, he might have persuaded a few Republicans to reconsider their positions during his second congressional trial. But he remained silent and Trump, once again, was acquitted – further tightening his grip on the GOP for the foreseeable future.

Like Barr, Stephanie Grisham spoke the truth so long after her Trump service ended that voters couldn’t factor in what she had to report to make their November 2020 presidential pick. from the White House, Grisham had daily access to the White House. press corps and could have shared with any of them the details of a White House she would later describe in her book, “I’ll Take Your Questions Now,” as “a clown car on fire running full speed through a warehouse full of fireworks.”
Instead, she actively avoided the press, refused to hold a single briefing (a decision she attributed to Trump), and saved her observations for later publication. To her credit, Grisham said she regrets allowing Trump and admits she stayed too long at her job.

In fairness, it should be noted that Trump officials were not the only ones withholding critical information, which could have informed political debate, for their books.

Journalist Bob Woodward, deputy editor of the Washington Post, recorded seemingly newsworthy information Trump told him about Covid-19 for his book “Rage.” In the book, Woodward wrote that Trump admitted in February 2020 to understanding the severity and danger posed by the virus, but he repeatedly downplayed the threat to the American people for months afterwards.
Given Woodward’s position in a profession of truth, her choice to reserve these conversations for her book drew criticism from her colleagues. Woodward pushed back against criticism of his decision, telling NPR, “If at any time I thought there was something to tell Americans that they don’t know, I would.” He also said he couldn’t believe Trump’s information was true. Trump responded by saying Woodward was a “Democrat” who “works with the Washington Post…you know all about the Washington Post, you don’t take a break from them.”
For his part, Trump also aimed a slew of insults at his former critics in the administration, calling Esper “weak and totally efficient” and adding “because of that, I had to lead the military.” And just as Bolton was about to post, Trump took to Twitter to say, “Never had a clue, was ostracized and happily dumped. What a drug!” He said Barr, “…never had the energy or the skill to do the job he was set up to do.” And regarding Grisham, Trump blamed a breakup for his “angry and bitter” turn toward his administration.
In a contest over facts, Trump’s record of false and misleading claims — more than 30,000, according to the Washington Post — would favor the book’s authors. However, their credibility advantage only makes their choice to withhold information at this time more troubling.

Each of them could have drawn serious attention to the former president had he spoken out while in office, but all fell silent when their country needed it. Now it seems that when the truth mattered most, they chose selling books instead.