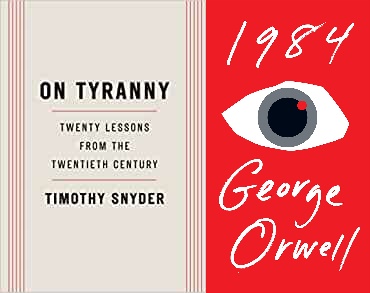 Unit sales of printed books continue to exceed 2020 figures in the first few weeks of 2021. For the week ended January 16, 2021, units jumped 22.7% from the comparable week of 2020 in points sales that fall under NPD BookScan.

In the context of the January 6 insurgency in Washington, DC, a few books on political upheaval have performed well this week. Timothy snyder On tyranny sold nearly 25,000 copies, placing it in fourth place on the global bestseller list. 1984 by George Orwell has sold over 24,000 copies, making it the sixth most popular book last week. The strong performance of On tyranny and another good week for Barack Obama A promised land Helped give a 16.5% increase in sales in the adult non-fiction category last week.

The biggest gains, however, were in the young adult categories, with fiction up 47.6% and non-fiction up 46.9%. The liberation of Concrete rose by Angie Thomas has helped increase sales of YA fiction, selling nearly 18,000 copies. We were liars by E. Lockhart also had a solid week, with sales exceeding 17,000 copies. In YA nonfiction, Stamp by Jason Reynolds and Ibram X. Kendi was the top seller, selling over 4,100 copies.

The adult fiction category also had a strong week, with print unit sales up almost 30% from 2020. Charlie Mackesy’s The boy, the mole, the fox and the horse was No. 1 in the category, selling nearly 25,000 copies.

For the first two weeks of 2021, unit sales of printed books increased 23.9% compared to the comparable period of 2020.