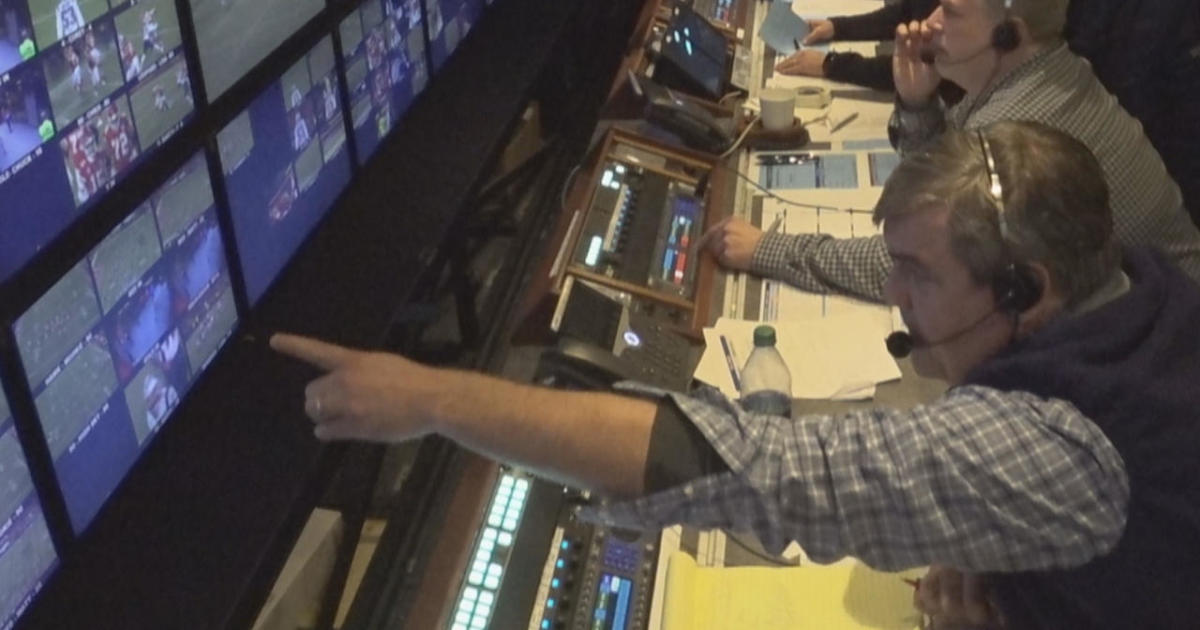 For nineteen Super Bowls now, Ken Aagaard of CBS Sports has incorporated as much TV technology as possible into the stadium for the biggest game of the year. Tonight at Mercedes-Benz Stadium in Atlanta, he has 115 cameras, including three SkyCams flying through the air, and 28 more stuck in the pylons marking the edges of the end zones.

“You get those final shots here on the sideline, right down to the 10-yard line,” Aagaard said. “There isn’t a square inch of this land that we haven’t covered.”

Good news for the fans? Sure. But maybe not for replay producer Ryan Galvin. After each game tonight, he’ll only have three seconds to choose which of those camera angles to broadcast as an instant replay.

Each camera is recorded by a digital tape recorder; each tape recorder has a name. Galvin memorizes them with a scribbled card in his hand. “You could make it look beautiful with some kind of Excel document, but I don’t know how to do all of that,” he said.

To catch the first-ever instant replay, go back to 1963, the year CBS director Tony Verna carried a half-ton tape recorder to the Army-Navy game.

He was given an old copy of “I Love Lucy” to record it. (The tape at the time was scarce and did not perform very well.)

Verna’s first 30 attempts to replay that day failed. Then, in the fourth quarter, Army had the ball on the one-yard line. “We were in the hands of fate, whether this machine was going to do it or not. And once I launched it, I went, ‘Oh, ****, don’t date me now!“Verna recalled in a 2004 interview for The Television Academy. “I don’t want to see ‘Hey, Lucy’ on the tape!”

Quarterback Rollie Stichweh recalled: “The game was basically climbing over and being lucky to tip over into the end zone.” Stichweh’s touch became the very first instant replay.

“The CBS switchboard was inundated with calls saying, ‘Did the military just score on the same coin again? “” Stichweh said with a laugh.

Ironically, no tape from this historic television moment survives.

But subsequent reruns produced some of the most iconic images in sports and television – leaving us in awe, if not inspired, at times enraged by what we saw.

And yes, sometimes replay allows you to change a call.

But first, a producer like Ryan Galvin has to find the right angle. He has help; tonight, three dozen technicians, including Lisa Menzies, will be monitoring and controlling all of those camera angles using some kind of high-tech DVR.

Menzies did a replay of a touchdown for Silva-Braga: “And I could slow him down like that, to show he has both feet in it.”

So anytime anything moves in slow motion tonight just remember how fast it’s going for the guy in front of all those monitors. “Let’s talk about team play – it’s almost as much a team as the guys on the pitch,” said Galvin.