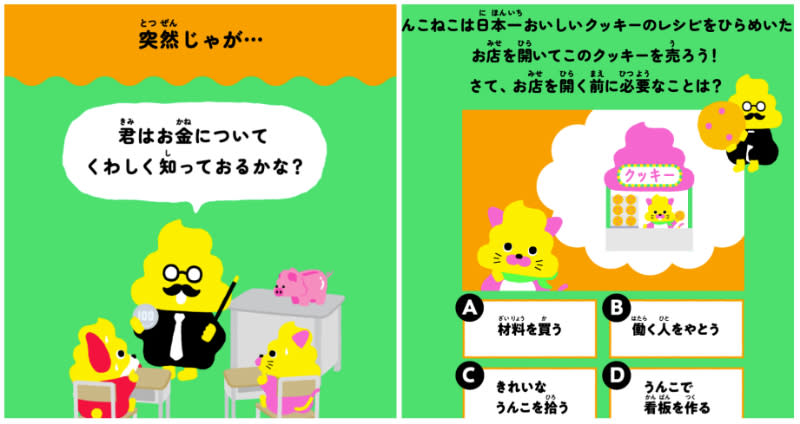 A poo-themed children’s financial education textbook is out of stock in Japan due to an overwhelming number of orders.

The Financial Services Agency (FSA) in Japan offered to distribute free “Poop Money Drill” textbooks starting in April for those who apply, causing a massive out-of-stock due to its popularity, reports SoraNews24.

An average of 10 books were distributed by the FSA in April; however, the number soared 1,000 times on June 16. The FSA decided to distribute the books for free in order to maintain the financial literacy of the public to help stabilize the economy.

“Poop Money Drill”, the latest installment in the “Poop Drill” series, traces back to the original “Poop Kanji Drill” manual, which became popular in 2017. The book is divided into two topics, one covering the importance of the circulation of money in society and the other discussing personal financial responsibility.

More from NextShark: Why some ‘Shang-Chi’ viewers thought there were Pokémon in the movie

Many designs feature poop-like themes. One page shows a teacher teaching a dog and a cat how to save money, all sporting poo-shaped heads.

A man who wanted to educate his children about money praised the book for giving them a head start on financial literacy.

“I need money when I go out in society but it is very difficult to educate [that idea to] my children. The exercises were made for children and my daughters seemed to enjoy them. Parents and children talk about money [and] I think it was a good opportunity to do so,” the man said. NHK.

Many others too praise the manual to keep their children informed in an entertaining way.

“I think it’s wonderful that children start with what they like [and] the request to the extent that it has been suspended indicates the very need to understand and that children love to learn,” wrote one user.

“I absolutely want to show it to my child!” another user commented.

Due to excessive demand, the FSA is suspending orders for about a month and a half until the system is cleared. They also promised to continue offering the book in the future and release the books as soon as possible.

The “Poop Drill” series has sold over 9.5 million copies since its first release in 2017. In addition to financial literacy, the books also teach children about road safety, disaster prevention and government.

An online version of “Poop Money Drill” is currently available on the Unko Gakuen website free.

2022-06-24
Previous Post: REPORT: Book sales for several official Trump bombshell memoirs during the post-Trump era
Next Post: The BIG Pharmacy BIG MAD sales have arrived! Discounts of up to 90% with prices as low as RM1.