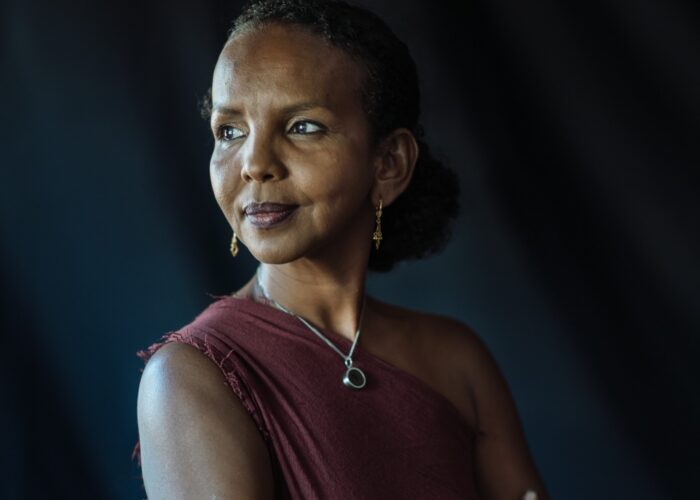 Even though it’s been almost 30 years since Shugri Said Salh left her native Somalia, fleeing the East African country’s burgeoning civil war, she admits she still sometimes laughs alone in her car when she’s finds herself instinctively scanning the horizon — looking for signs of rain or dangerous predators — as she drives her family van through traffic in Santa Rosa.

Salh may be running a quintessentially American errand like getting to Whole Foods or taking one of her three kids to soccer practice in the suburbs, but her memories of the nomadic outdoor life she lived as a girl herding goats across the vast Somali desert still surface and absorb her imagination with a deeply sensory and even nostalgic force.

“I’ve come so far from where I started that it’s often comical,” Salh wrote in his moving memoir, “The Last Nomad: Coming of Age in the Somali Desert.” “I feel like a portal between two worlds.”

Salh’s book is an absorbing attempt to explain, through vivid memories and compassion for one’s own personal traumas and triumphs, what it feels like to have lived two such radically divergent lives. Now a trained infusion nurse married to an Ethiopian software engineer in Northern California, Salh is acutely aware, as her title suggests, of her remarkable position as the last person in her centuries-old lineage to follow the traditions of a purely nomadic way of life. , governed entirely by the rhythms and demands of nature.

One of his mother’s nine children (his father, an Arab scholar, had 23 children with numerous wives), Salh was sent before starting first grade to live with his beloved maternal grandmother, or ayeeyo, nomad and central character of his life and his book. Salh fondly writes that she is an adventurous and fearless child, learning to navigate the seemingly endless arid landscape on her own, tending her kids, making yogurt, climbing termite mounds, and moving steadily with her clan in search of pasture and new water. source, watching adults pack their belongings and portable huts onto camels.

Yet Salh’s nostalgia is complicated both by the ever-present threat of violence, war and famine (she was born during one of Somalia’s worst droughts) and by her shifting opinions – particularly acute now. that she is an American medical professional – on the long-standing mistreatment of her native country. women.

“A young woman’s virginity signified her worth, and once she was lost, there was no point in fighting for her,” Salh writes.

And yet, Salh reflects now, she was so indoctrinated in these beliefs that she and her sister Arafo looked forward to the barbaric rite of passage as an opportunity to join the ranks of “clean girls”.

Salh realized she wasn’t considered “normal” by global standards “only when so many Somali women like me were pouring into Canada as refugees” in the early 1990s, she said recently by phone. “Then our mutilated bodies were discovered either while giving birth to children or (visiting a doctor) for a period problem or, in my case, when I wanted to get intimate. People were talking about us in the news. There was this obsession with beautiful, seemingly normal Somali women that had something so wrong with them.

She acknowledged that it was difficult for Americans, and probably many of her readers, to understand that “when you come from this world that I grew up in, that was normal. You don’t know any better. All the women I knew were mutilated. If she wasn’t, we laughed at her. Even in adulthood, some of them went for it before marriage.

Salh underwent corrective surgery shortly after her marriage. Since then, she has struggled to dismantle the psychological knot of shame she carried within her.

“The psychological effects of shame are so important and so deeply rooted,” she says. Salh and her sisters talk over the phone about their journey to mental health and finally feel empowered to make other choices.

“I will not perpetuate this ritual with my daughters,” she said. “Change does not come easily, but I am encouraged to see so many Somali women growing up in the diaspora developing more of a voice to fight back. I want this book to reach the whole world because I hope one man will read it in Somalia and say, ‘Wow, let’s not do this to our women.’

When asked if it was painful to relive her experiences while writing the graphic section about her genital mutilation, Salh said that, surprisingly, “the orphanage chapter was actually more difficult.”

At the age of 9, after the death of her mother, Salh was sent to live with her siblings in a group home in Mogadishu run by well-meaning Europeans. (She describes her shock at seeing her first white person.)
“My nomadic soul had begun to erode,” she wrote. She longed for her grandmother as the surrounding town turned into the chaos of war.

In January 1991, Salh and her family fled Mogadishu on foot, eventually reaching a refugee camp in Kenya. A year later, she arrived in Ottawa, where she met her husband, Selehdin Salh. He took a job in Petaluma in 1999 and the two moved to the Bay Area. Salh attended Pacific Union College of Nursing in Napa and says she worked to exhaustion during the COVID pandemic.

She is proud to belong to a nation of poets and is a gregarious storyteller with the patients she cares for, personalizing and adding levity to otherwise sterile procedures like starting an IV. As seen throughout his memoirs, Salh’s sense of humor remains intact.

“I laughed many times while writing this book because this life I’m living seems impossible,” she says. “I could have lived a million other lives. One life was reserved for me, the life of the desert. As my mother had planned, I would still be in the desert, married to a nomad who, if I did not give no son, will not hesitate to take three more wives.

“Would I have survived this very hard life? Would I have been a badass woman like my grandmother? Who knows?”

The Copperfield Books: Shugri Said Salh will be in conversation with Meg McConahey at 7 p.m. on September 2.

And in conversation with Marcie Thomas at 5 p.m., September 20, a Brown Girl Collective Facebook Live event. For information, facebook.com/BrownGirlCollective