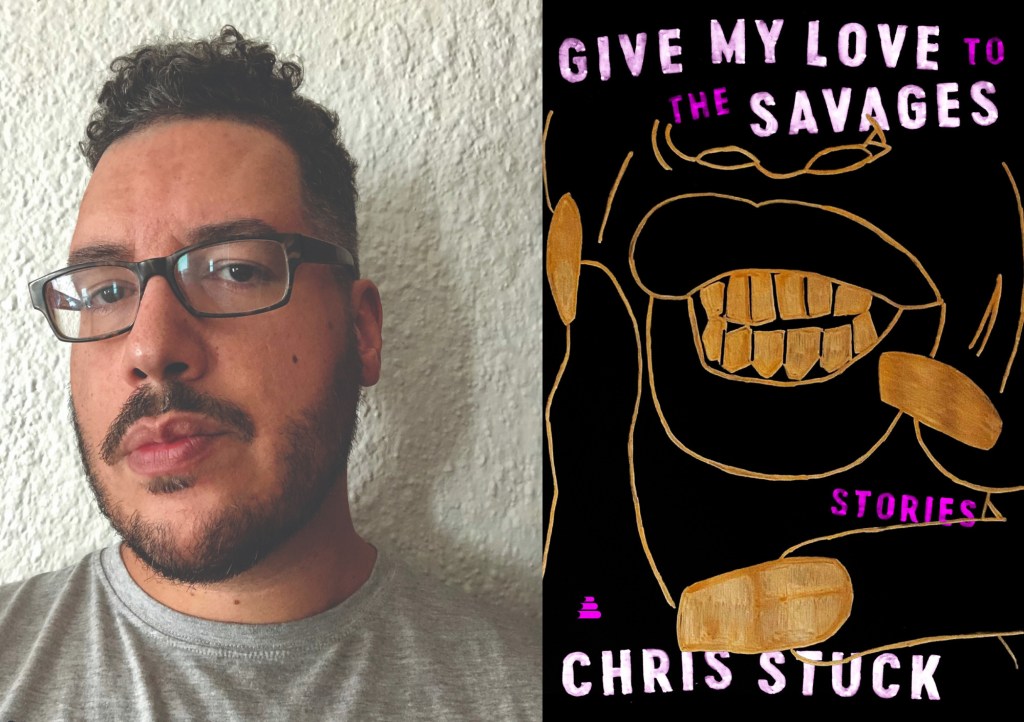 Chris Stuck’s first short story collection, “Give My Love to the Savages,” was slow to arrive – two decades after graduating from his MFA in Creative Writing. Now that Stuck has finally made it at 45, he’s not holding back.

The book’s first story traces the life of a biracial man like Stuck from the first time he heard the N word – in kindergarten – through decades of sometimes casual, sometimes sharp, but always personal American racism.

Stuck follows this poignant and personal story with a wild and absurd story about a man who, after years of male misconduct, wakes up and finds himself transformed into a six foot tall penis. Other stories come and go in tone from realism to satire, and in subject matter, ranging from a black man meeting white racial fetishism to a black Republican whose skin turns white in patches in the shape of states and congressional districts.

Stuck’s post-school years in the literary wilderness began with writing short stories and a novel that were hampered by too much realism and autobiography. “Maybe I was watching ‘The Wire’ too much,” he says. “Some of my family weren’t law-abiding citizens all the time and I was around them, so I started writing about them. But that didn’t allow me to be really creative.

Stuck, who spent eight years working in diversity management and writing during his lunch breaks, recently spoke by video from Portland. “Somehow I got back to where I was supposed to be with these stories.”

This interview has been edited for length and clarity.

Q. Do you look at the years it took you to get a book with regret or did it have to take that long or you might have published a lousy novel 15 years ago?

It took too long, but it took exactly the time it needed. I wrote bad novels that were just missing something. I used to think of writing a novel as my ticket to publication, but I always like short stories first.

I wish I could do that at 25, but I smoked weed and got drunk. I needed to travel, I went abroad, without these experiences this book would not have arrived for me.

Q. How did growing up with a biracial affect your worldview and subsequently your writing?

I grew up with older brothers from my mother’s first marriage who are black and they gave me a path down to identity. But I also grew up on the father’s side of the family. So seeing all sides of American racial dynamics is what interests me.

I approach things from a black perspective, but I see every nook and cranny of the race, even in my own family. My older brothers are much darker skinned and have been profiled, but people don’t know what I am so I can just look at things. I’m lucky because both sides of my family are cool, but I’ve known other biracial people who have been shunned by one or both sides.

Q. Has working in diversity management also shaped your thinking about race and your writing?

Absolutely. Running has always been a part of my life, but I moved to Portland in 2007 and Portland is really white. I had two interviews exactly at the same time; the other was for a food marketing company. But my job was at a black owned business where the owner’s wife was white and there were other minorities there and that definitely kept those issues on the top of my mind. I often wonder what would have happened if I had chosen the other job.

Q. A lot of your characters are successful and even wealthy. Was it a conscious decision?

It was a conscious decision on my part – it’s a reaction to a publishing industry that only published what it had seen before, usually inner city or slave stories. This stuff needs to be done, but it’s just a matter of balance. I just wanted to write new, different black stories. These characters all have issues, but black success is not always represented. My parents had public service jobs and saved their money and doing well for themselves and my boss was a really successful black man.

Q. Your stories are so varied. How did you decide on the order and what it might mean for the reader?

I like things with an edge. I wanted both stories with biracial characters [the opening one and the title story, set during the Rodney King riots] be bookends. And I put that first word as an opening because I knew it would grab people’s attention with the N word being so important.

The Penis Story was the last one I wrote and when I originally sent it to literary publications no one wanted to publish it. So I thought my editor would say, “I like everything except the story of the penis. But she loved it. I buried it in the middle to give people a few warm-up stories before they came up with something so crazy. Otherwise, they could be in the first story and then say, “I don’t want to read this. I think I was just scared because it was such a strange idea. But my editor said let’s be bold and made it the second story.

Q. Have your feelings while writing about race and racism changed with everything that happened in 2020?

Yes. I finished editing this book and since then I have had all these other ideas that are way darker and way more absurd than this book which is weird to say because they are pretty absurd. In fact, I feel like there is more hope in this book than in the new collection I’m working on. This book was written in a different climate.