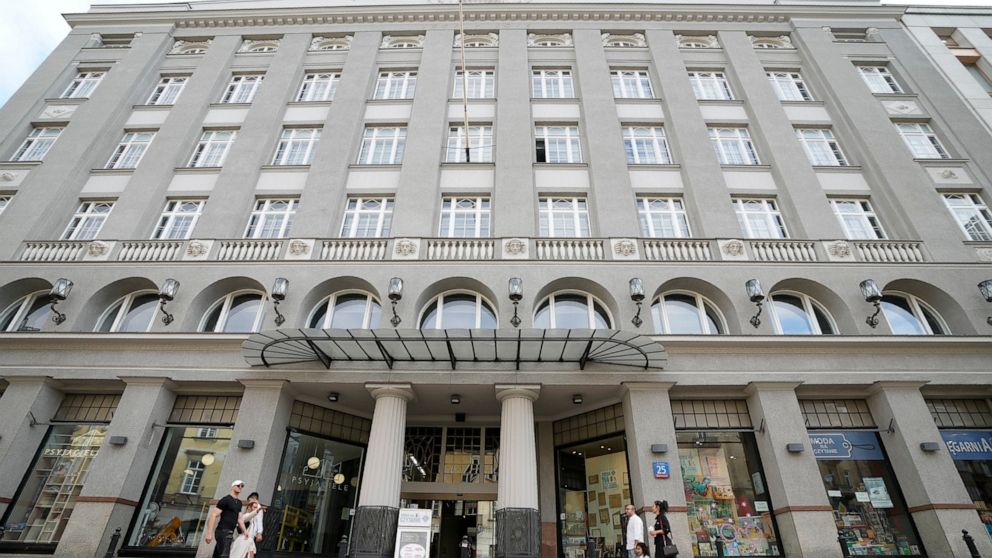 WARSAW, Poland – The Jablkowski Brothers department store was once a Warsaw landmark that revolutionized shopping and brought merchandise to a modernizing society in the early 20th century. But unlike Harrods in London and other Western counterparts, the company was forced into bankruptcy and seized by the Polish Communist regime which seized power after World War II.

When communism fell in 1989, the heirs of the Jablkowski family began a long legal struggle to reclaim their properties. They were preparing to launch when the coronavirus pandemic struck, dealing one more blow to a family business that has had a history of hardship reflecting Poland’s adversities.

“The pandemic hit us at a time when we were almost ready to leave,” Monika Jablkowska, one of the heiresses, told The Associated Press.

The pandemic has created new uncertainty as it has accelerated the trend for online shopping, leaving questions about the type of in-store retail experiences consumers will adopt in the years to come.

The family business started when Aniela Jablkowska started selling stationery from a dresser in 1884. It has grown to be the largest and most important department store in Eastern Europe. . In 1914, just at the start of World War I, the family opened their main building, a six-story gem of Modernist architecture with high ceilings and stained glass windows that is now a historic monument.

Now a member of the European Union, Poland was at the time fragmented by foreign powers, Warsaw being part of the Russian Empire. In its early days, the company sold its goods in rubles, with a catalog and delivery service that sent goods as far as the city of Vladivostok in far eastern Russia.

The company went through two world wars, hyperinflation and even the influenza pandemic of 1918-20. During World War II, when the German occupation forces destroyed most of Warsaw, the building was among the few to survive.

What dealt the final blow to the business, however, was Poland’s post-war communist regime, which imposed a huge tax forcing it into bankruptcy, then seized the store in 1950.

Jan Jablkowski, one of the heirs, said the family felt a “strong sense of obligation to continue” as part of the city’s heritage and had turned down even attractive purchase offers.

“We believe that such enterprises, which have been present for many generations – just like the material substance of the city, its squares, its monuments, the street names – are all elements of the identity of this city,” said Jablkowski, a retired engineer who was former director of the Polish Institute for Automation and Measurement.

According to Cezary Lazarewicz, author of a book about the company, “Six Stories of Luxury,” the store offered a number of innovations to shoppers in town – not only all the clothes, toys and other merchandise for sale, but also neon advertisements, a sidewalk cafe, fashion shows and live piano music to stimulate shoppers.

“It wasn’t just a department store,” but a place that offered a sense of magic, Lazarewicz said. “It was an exceptional place on the Warsaw map.”

After the fall of communism, the family began a legal battle to reclaim the building, but it took over 20 years as they first had to rebuild the pre-war business. Even after the property was legally returned in 2004, a bookstore refused to vacate the premises, triggering further court cases until the store was finally taken over in 2013.

The heirs’ original plan was to revive the department store, but with department stores struggling to survive across the world – a trend accelerated by the pandemic – they realized the business model was no longer sustainable.

So they developed a new business plan to open it up as a 4,500 square meter (48,500 square foot) retail space with concept stores, restaurants and spaces for cultural events. . Then came the pandemic.

“The big question is what the business will look like after the pandemic and whether the model will still be relevant thereafter,” said Monika Jablkowska.

Even before the pandemic, Poland experienced a huge retail upheaval, with the arrival of international companies like Marks & Spencer and The Gap, only to then exit the dynamic but demanding market where foreign brands compete with manufacturers of Polish clothes as Reserved. Online shopping has also taken root, with Amazon recently entering Poland.

The fact that people are buying less clothes now and have switched to more casual clothes creates uncertainties about what stores might want to open in their building, Jablkowska said.

Two business professors who have studied the Jablkowski company, Tomasz Olejniczak and Anna Pikos at Kozminski University in Warsaw, argue that it is in a weaker financial position than its counterparts elsewhere because of the way the industry and Polish companies were dispossessed of their capital by the Communist authorities.

Other department stores from Tokyo to Paris to London “are struggling, but over the course of their continuing history, they have amassed enormous wealth and resources that they can now use to reinvent or redefine themselves at home. era of luxury and e-commerce, ”said Olejniczak and Pikos. in a joint email.

“They have all the freedom they want to reinvent themselves, but they also have virtually no resources and very limited money,” the two said of the Jablkowski project.

Jablkowski says the family are now taking a cautious approach to ensure their survival. During the pandemic, managers and employees suffered voluntary pay cuts and the company is once again generating revenue by hosting fairs and exhibitions. No key decisions will be made until the shape of the post-pandemic world is better defined.

“We remember the history of the past 100 years and we care deeply about the secure operation of the business,” Jablkowski said. “For this reason, we are cautious.”