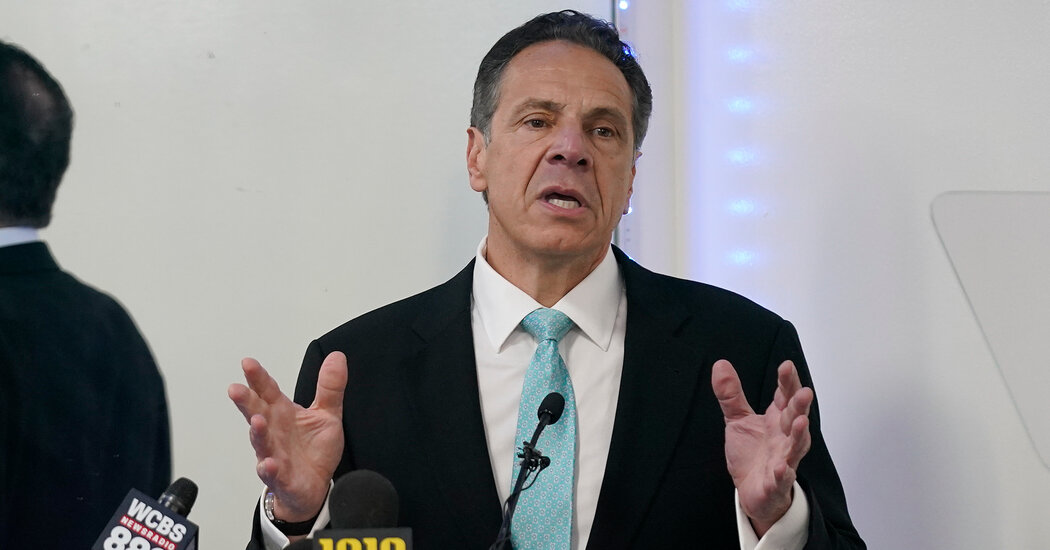 Former Gov. Andrew M. Cuomo sued the New York Ethics Commission on Friday, saying its efforts to force him to hand over the proceeds of a $5.1 million contract violated his constitutional rights.

The dispute centers on the commission’s approval of Mr. Cuomo’s 2020 memoir – a decision it overturned last year over what it said were misrepresentations, among other things, about his use of the company’s resources. the state.

When the panel, the Joint Commission on Public Ethics, ordered Mr. Cuomo to turn over proceeds from the book, the state attorney general’s office balked at enforcing the directive, saying the commission needed to investigate first. to try to recover the money.

In the lawsuit, filed in the Albany State Supreme Court, Mr. Cuomo attempts to block such an investigation, arguing that the commission’s prior actions and what the lawsuit calls harmful comments demonstrated that it had already decided on his guilt.

“Never in the history of New York has an agency so mind-bogglingly and irresponsibly prejudged a case on which it is the final decision maker,” Mr. Cuomo’s court documents say.

A spokesman for the ethics commission declined to comment.

The lawsuit is the latest example of the visible and aggressive stance Mr. Cuomo, who resigned as governor in August, has taken since returning to public life in recent months.

Mr Cuomo’s resignation came after a report by Attorney General Letitia James revealed he had sexually harassed several women, including some who worked for him. Mr. Cuomo denied any harassment.

After several months in isolation, Mr. Cuomo has recently reappeared. He spent hundreds of thousands of dollars on television commercials promoting his accomplishments as governor, spoke at two churches, and began moving from personal issues to larger political themes.

Where he once expressed contrition and said he had been ‘too familiar with people’, he now blames ‘cancellation culture’ for forcing his resignation.

The lawsuit against the ethics commission fits that pattern, with Mr Cuomo insisting he did nothing wrong.

Mr. Cuomo has repeatedly said that state resources were not used to prepare his book, “American Crisis: Leadership Lessons from the Covid-19 Pandemic,” and that all staff working on the project had done in their spare time. The commission disputed this assertion.

A sweeping State Assembly investigation into whether Mr. Cuomo abused his power has since revealed that Mr. Cuomo “used the time of several state employees, as well as his own, to pursuing personal gain during a global pandemic.”

After revoking its clearance from the book deal, claiming Mr. Cuomo had obtained it under false pretences, the commission went further.

“Absent JCOPE’s approval of his outside activity in connection with the book, Governor Cuomo is not legally entitled to retain compensation paid to him,” the panel said in a statement. December Resolution in which he ordered her to repay proceeds from the book, which reportedly totaled $5.1 million.

But after the attorney general’s office refused to enforce the order, the commission went ahead with the legal process for a formal hearing, which Cuomo’s team is now seeking to reverse.

Lawyers for Mr Cuomo argue the commission prejudged him, saying his previous statements – including in a notice of hearing that the evidence against the former governor was “overwhelming”, “incontrovertible” and “controversial” — had rendered the panel unable to be impartial about whether he had broken the law.

For years, the ethics commission has been decried by government watchdog groups for its perceived vulnerability to political influence. Powerless and at odds with the commission, Mr. Cuomo took over that charge.

The suit comes amid signs the commission’s future is shaky. State heads of government have signaled that they plan to create a replacement body as part of this year’s state budget, although the final form of the new entity is not yet in place.

Gov. Kathy Hochul had proposed a new way to form such a panel that would give law school deans, rather than lawmakers, the final say on nominations. An alternative plan has since taken shape among lawmakers. He would keep the power of appointment with them, but he was strongly criticized by watchdog groups.

“New Yorkers deserve a truly independent commission, not simply replacing one flawed political entity with another,” a coalition of such groups said in a statement Wednesday.

2022-04-01
Previous Post: BTC and ETH Holders See Profits Amid Price Recovery; is there any reason to worry
Next Post: Make a smart investment choice this Gudi Padwa with Bajaj Finance fixed deposit