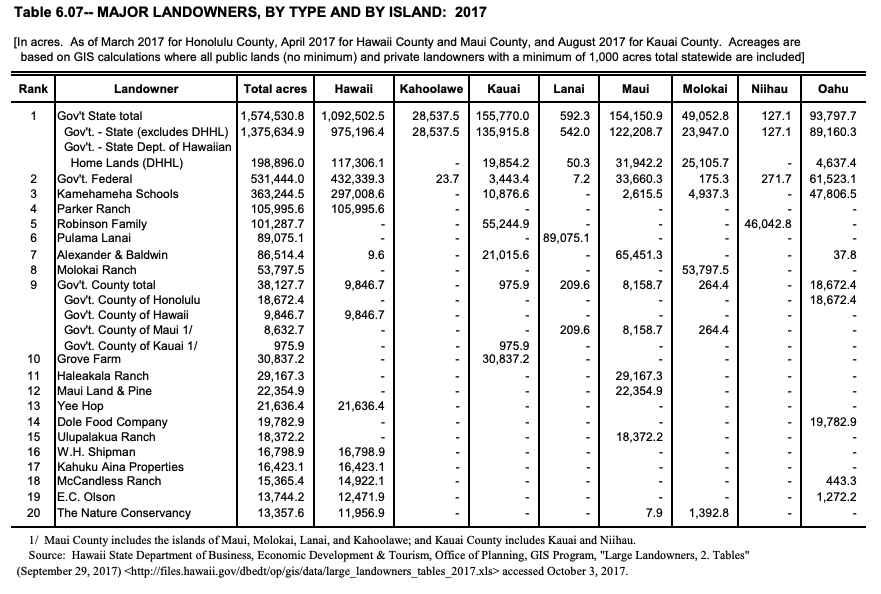 It seems every two weeks the staff scramble to find our most recent copy of Pacific Business News “Book of lists” here at the Civil Beat offices in Kaimuki.

It’s an invaluable resource of insightful and insightful data about Hawaii – the richest zip codes (96821, for Aina Haina-Niu Valley, are the best), the largest hotels in Oahu (the Hilton Hawaiian Village is No. 1), most downtown parking spaces (check out Waterfront Plaza), even larger breweries (Maui Brewing in Kihei).

It also cannot be found online unless you are a PBN subscriber, in which case you get both online access and a hard copy.

I was thinking of the “Book of Lists” – which we located, by the way, in order to research the largest unions (Hawaii Government Employees Association has the most members) – just like the last edition of the “Hawaii State Data Book” was released on Monday.

This is another invaluable resource, and it has the added benefit of being free and online.

Produced annually by the State Ministry of Business, Economic Development and Tourism for more than 50 years, the “Data Book” has covered a “wide range of information”, as a press release rightly notes, in areas such as population, education, environment, economy, energy, real estate, construction, business, government, tourism and transport. There are 24 sections in all.

The supply is varied and credible and includes the US Census Bureau, the State Department of Labor and Industrial Relations, the US Department of Defense, and many more. The 2020 edition of the “Data Book” even quotes PBNs ranking on unions (see above) as well as the largest private employers (the largest is The Queen’s Health Systems).

The “Data Book” helps us better understand Hawaii and where it is headed. I relied heavily on it for my thesis in the 1990s, just as the Internet was becoming general but limited public use.

I’ll let you browse the “Data Book” at your leisure, but here I’m going to offer you some of my takeaways from the over 850 data tables, which can be downloaded as PDF or Excel files.

As DBEDT points out in its press release, Covid-19 devastated the local visitor industry last year.

Scheduled flights have increased from over 61,000 barely 24,000. The general basis of excise duty for hotel rentals – $ 2.6 billion – was cut by more than half from the previous year. And rental cars have become scarce and very, very expensive (see table below).

Hawaii’s airport duty-free revenue plummeted 25.6% percent to $ 78 million for the contract year ending May 31 – the first time it has fallen below $ 100 million since 1985. And hotel occupancy rates have fallen 37% while the income per available room was just $ 99, compared to RevPAR (as it’s called in the industry) of $ 229 the previous year, pre-Covid.

Given its centrality to our economy, DBEDT tracks a lot of visitor data. The one that caught my eye is a table titled “Areas of Improvement for Visitor Satisfaction” from 2019.

Hawaii has long suffered from an overcrowded and physically dilapidated correctional system. We even house hundreds of inmates in an Arizona facility.

“This includes inmates physically present in one of the correctional establishments operated by the Ministry of Public Security, accommodated in an establishment out of the State or under contract, on leave, in a medical establishment, in a situation of escape or serving intermittent sentences, “according to DBEDT.

My educated guess is that the lower number of inmates has to do with the fact that as of March 2020, when Covid first hit Hawaii, more than 800 inmates were released to prevent the spread of the virus in prisons and prisons. By May of the same year, 47 had already been re-arrested on various charges.

All the data in the “Data Book” is not up to date. DBEDT makes every effort to update information as soon as it becomes available.

But even dated data has stories to tell. For example, we like to drink beer. Of the $ 714 million spent statewide on alcoholic beverages in fiscal 2017, beer sales exceeded wine sales, followed by distilled spirits and sparkling wines.

Last year, you will recall, was the first time Hawaii had instituted statewide postal voting.

And in 2020 we liked to name little boys Liam, Noah, Oliver, Elijah and Kai – in that order – and little girls Olivia, Sophia, Isabella, Amelia and Luna. Ten years ago, Liam and Luna weren’t even in the top 10 but Dylan and Madison were.

Here’s another sign of the times: Eugene Tian, ​​the state’s economist, said by email that DBEDT stopped printing hard copies of the “State Data Book” for good in 2007.

But some books are apparently available on CD-ROM, whatever it is.

Sign up for our FREE morning newsletter and be more informed every day.