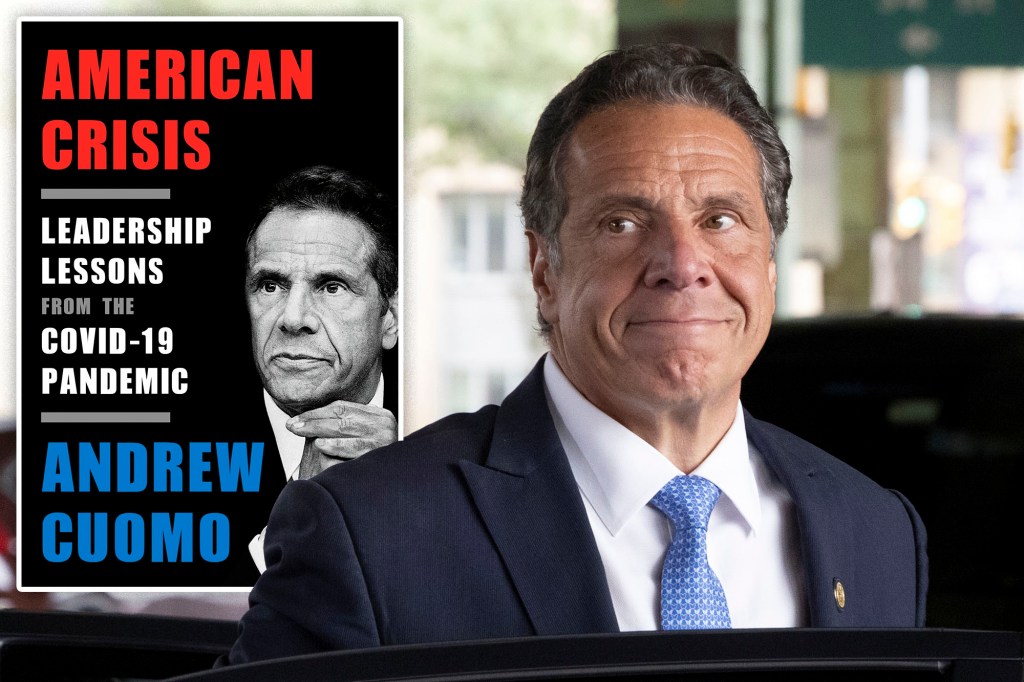 New York’s High Ethics Committee ordered the disgraced ex-governor on Tuesday. Andrew Cuomo will pay the state $5.1 million in accounting profits he made on the backs of taxpayers amid the worst of the COVID-19 pandemic.

The extraordinary resolution was approved by the Joint Commission on Public Ethics in a 12-1 vote – a month after the ethics agency voted to revoke its prior approval allowing Cuomo to earn outside income through to his book “American Crisis: Leadership Lessons from the COVID-19 Pandemic” while he was still governor and New York was in the throes of the deadly coronavirus outbreak.

The only dissenter was William Fisher, a Cuomo appointee.

JCOPE rescinded its endorsement after finding Cuomo violated promises not to use state resources or government employees to prepare the book. He is due to pay the money to the state by next month.

The resolution, drafted by Senate Republican-appointed Commissioner David McNamara, said Cuomo “no longer has the legal authority to engage in outside activity and receive compensation with respect to the book” since that JCOPE revoked its approval.

“Governor. Cuomo is not legally permitted to retain compensation … for any form of outside book-related activity,” McNamara said.

The panel concluded that the proceeds of Cuomo’s book should be turned over to state Attorney General Letitia James – whose office’s investigative report forced the Democrat’s three-term resignation after propping up a series of accusations of abuse and harassment leveled against the disgraced ex-governor by current and former staff members. .

“It is ordered that no later than 30 days from the date of this resolution, Governor Cuomo pay to the Attorney General of the State of New York an amount equal to the compensation paid to him for his related outside activities to the book,” reads the resolution.

James would determine to whom the profits would be distributed.

Whether the state can recoup the benefits of Cuomo’s self-congratulatory memoir on the pandemic remains to be seen, with some ethics experts questioning the legality, as well as the ex-governor. James released a statement saying, “”We are currently reviewing JCOPE’s vote and determining the best way to move forward.

Cuomo’s office said earlier it brought in about $1.5 million after taxes and expenses for the book last year, one-third of which was donated to United Way of New York State and the rest was invested in an irrevocable trust for his three adult daughters.

Grandeau said JCOPE is trying to make up for having “approved” the book deal a year and a half ago, deferring the decision to legal counsel Martin Lavine. “When you have bad people running your ethics agency, you end up with a governor who can get $5 million using state resources,” he said.

Fisher, Cuomo’s appointee and dissenter, said in a brief debate at Tuesday’s meeting that JCOPE “did not have the authority” to order the former governor to repay proceeds from the book and that he had “no reason” to appoint the AG as recipient and arbiter. funds.

But other commissioners, including James Yates, an appointee of Assembly Speaker Carl Heastie (D-Bronx), said it would be counterintuitive and wrong for JCOPE to revoke its approval of the deal. book only to let Cuomo off the hook by letting him pocket the profits.

Cuomo’s book deal is also being investigated by James, the FBI and the Brooklyn U.S. Attorney’s Office. The state Assembly Judiciary Committee’s impeachment report found that Cuomo had extensively used staff members to help put together the book – although he insisted the work was done voluntarily and legally.

Cuomo’s team has also been accused of coronavirus-related nursing home deaths while negotiating the book deal, leading to accusations he was trying to look better to make a quick buck. on the tragedy.

Nursing home families and advocates who lost loved ones during the worst days of the pandemic applauded JCOPE for the late launch of the book to Cuomo.

” I’m very happy. It was a book of blood money lies written on the graves of 15,000 people,” said Tracey Alvino, whose father, Daniel, died after contracting COVID-19 at a nursing home in Long. Island.

“I’m shocked that JCOPE threw the book at him. JCOPE did the right thing. We’re used to seeing the little guy stomped on and the elite shielded and shielded.

Alvino continued, “Cuomo no longer has political coverage. No more friends in Albany. Score one for the morals and ethics team and all things fair and just.

Haydee Pabey, whose mother, Elba, died of COVID at the Isabella Geriatric Center in Washington Heights in April 2020, said, “It’s a happy day for us.”

“Cuomo tried to profit from the deaths of our loved ones. He wrote a book of self-satisfaction in the middle of a pandemic. It didn’t solve the problem. He made the situation worse with his policies. He killed people.

Assemblyman Ron Kim (D-Queens) called JCOPE’s action “a small measure of justice for the families whose memory of loved ones was trampled on by the former governor.”

“This book deal establishes criminal misconduct behind its removal from nursing home data. While our families were experiencing complete panic and despair, this disgraced former governor was carefully crafting his public image to maximize his personal gain. Every dollar must be collected and returned to the families of the victims of the nursing home for their pain and suffering,” said Kim, chairman of the Assembly’s aging committee, whose uncle died of suspected COVID-19 in a nursing home.

Cuomo’s attorney claimed JCOPE’s action was illegal and would challenge it in court.

“JCOPE’s actions today are unconstitutional, exceed its own authority, and appear to be motivated by political interests rather than facts and law,” Cuomo attorney Jim McGuire said.

“If they seek to enforce this action, we will see them in court.”