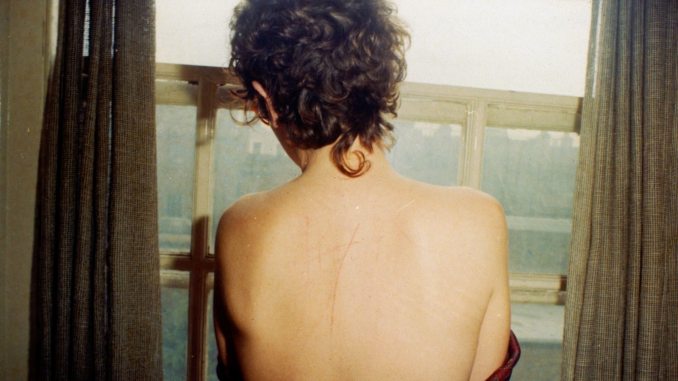 Nan Goldin’s fingerprints are everywhere. The idiosyncratic photographer, activist and subject of Laura Poitras’ first feature-length documentary in six years is both icon and iconoclast, an embodiment of what it means to hold two truths, wonderful and terrible, in balance: All the beauty and bloodshed.

Where to start with Nan Goldin? With his crazy work history? His saga of personal and community decimation? His success in the art world against all odds? Its cataclysmic influence on the expression and commerce of high art? Perhaps, as the doc would say, it’s best to start with her addiction: Goldin was first prescribed OxyContin in the ’80s after surgery while living in Berlin, where her daily consumption quickly increased from three to 18 pills. This is where her war against the Sackler family began.


Bloodshed is structured into two sections that intertwine and charge at a rate of devastation that your tear ducts absolutely can’t keep up with. One section gives Goldin a platform to tell his life story chronologically. The other follows his decades-long fight against the pharmaceutical reign of terror that is the appallingly inhumane Sackler/Purdue Pharma operation.

They’re essentially the same story, Goldin’s story, but one starts at the beginning and looks forward while the other starts in recent history and looks back, the two colliding and bringing us into the present, where the PAIN (Prescription Addiction Intervention Now) is slowly but surely tearing the Sacklers’ mouths from the teat of the art world it clings to so desperately for influence. By targeting major museums and art institutions with Goldin’s work in the permanent collection (The Met, The Tate, The Guggenheim, etc.), PAIN is able to threaten to remove Goldin’s pieces from anyone who receives Sackler donations or brandishes the family name, making remarkable progress in dethroning the Sacklers’ artistic philanthropy.

The film plays in a way that exponentially increases the viewer’s appreciation for the socio-political and artistic anomaly that is Goldin, and Poitras doesn’t need to do much to convince: Goldin narrates. An open book, sadistic charmer and seasoned storyteller, she has a dry, frank and truthful way with words, the kind of person who doesn’t need much to tell you what it means, a master at the art of sentence. (“I took him out and he called me Nan, so we broke free,” she says summarily of her bond with a dear, longtime friend.)

Best known for her slideshows, Goldin flips through hundreds of images and tells story after story – each captivating, culminating, well-delivered, leaving room for excitement for the next – often returning to her most famous collection of over 700 photos on 35 mm from 1979 to 2004, titled The Ballad of Sex Addiction. Brimming with candor, the photograph presents a life fully lived, aiming to capture the universal impossibility in the push-pull relationship between autonomy and dependency.

Goldin is a rare and holistic reflection of autonomy and dependence. The first is found in – well… everything, but above all – his professional integrity to work outside the system or try to change it from within. The latter is in the way she frames existence through the love and need of community, as well as in the loss of that community and the addiction that plagued it.

His brutal confrontation with death began at an early age with the suicide of his only sister, who was sent for “treatment” for fear of being gay when in reality their mother was in a debilitating mental state. Goldin’s familiarity with alienation and resulting love for the fringes of society is the result of being taken in at 14 and kicked out of every house she landed in, like her sister before her. Her experience of violence ranges from getting punched in the eye by a jealous ex to horror stories about sex work that she only recently started telling to fight the stigma around the work.

In the 1980s, her friends were dropping like flies in the wake of addiction and overwhelming ignorance amid the AIDS epidemic (she likens it to World War II). Close collaborators and friends like David Wojnarowicz walk into the doc and eventually walk away with the weight of their lives and work felt and lost in real time, dagger after dagger of deaths that shouldn’t have happened stuck in his heart.

Between stories, Poitras expands on the Sacklers’ generational criminality through well-documented talking heads that illuminate the family’s cruelty. In short, they have built an empire on the pain of others by falsely marketing addictive products, knowing they will create catastrophic suffering, cascading demand, and a steady stream of bloody profits. It is a terribly depressing reality.

Luckily for us, Goldin never dwells too long on anything. She’s a host, actress, tireless, career builder with incredible taste in anything expressive and cheeky enough for 10 people. Whether it’s challenging the National Endowment for the Arts for withholding funding for AIDS work or just taking a shitload of photos a week, she never stops working. She chronicles her many jobs – as a waitress at a Portuguese hot dog stand in a separatist lesbian community in Provincetown, a dancer in New Jersey (“I danced to make enough money to buy a movie” ) or an overbearing bartender at a dive shop – and her lowest moments – like her first stint in rehab in ’88 or the fentanyl overdose she miraculously recovered from – and the onslaught of male resistance from the world of art throughout.

She gets poetic and down-to-earth about the various New York neighborhoods she lived in at crucial cultural times, rubbing shoulders with John Waters, Jim Jarmusch and others, offering a fascinating insight into New York’s history outside of all the rest. She’s as much of a primary creative force as Poitras was on the outcome of the film (a “collaboration” as they called it at the New York Film Festival premiere), especially considering how big it is. of Goldin’s slideshows. Poitras spices up some theories of art and analyzes others’ so Goldin doesn’t have to, but for the most part the two let the photos speak for themselves, almost never providing individual context. In slideshow form, they overwhelm you.

Goldin’s style seems so familiar because she was so influential, but it’s also familiar in another way. From the way everyone you meet in New York City looks like someone you’ve met before, their photos look familiar, but distinctly and unmistakably their own. She wasn’t precious about them. If a friend didn’t like the way it looked, they could tear it up and Nan didn’t care. She just wanted them to feel good about the picture. A talking head says the subjects in her photos are intriguing enough to feel like characters to viewers, yet candid and real enough to appear to the subject simply as themselves — the ultimate compliment.

One of the most difficult elements is his complicated relationship with his parents, who deliver a creepy soul, briefly leaving your body with a heart of darkness quotes towards the end, their daughter dead in the spirit: “Life is a funny thing, this mysterious arrangement of ruthless logic for a futile purpose. All you can hope for is a knowledge of yourself, which comes too late, a harvest of inextinguishable regrets. It captures the mood of All the beauty and bloodshed, but it’s also what most distinguishes Goldin from his parents: a life without regrets. As Nan describes herself and her family – who she defiantly defines as friends, people she lived and learned with, not a romantic partner or biological family – they were “rebels fleeing America , living the life they needed to live”. She says it herself in the past, but All the beauty and bloodshed shows this spirit always flourishing, always moving, always shaking the world around it.


Luke Hicks is a New York film journalist and art enthusiast via Austin, TX. He earned his master’s degree in film philosophy and ethics at Duke and believes every occasion should include one of the following: whiskey, coffee, gin, tea, beer or olives. Like him or blast him on Twitter @lou_kicks.