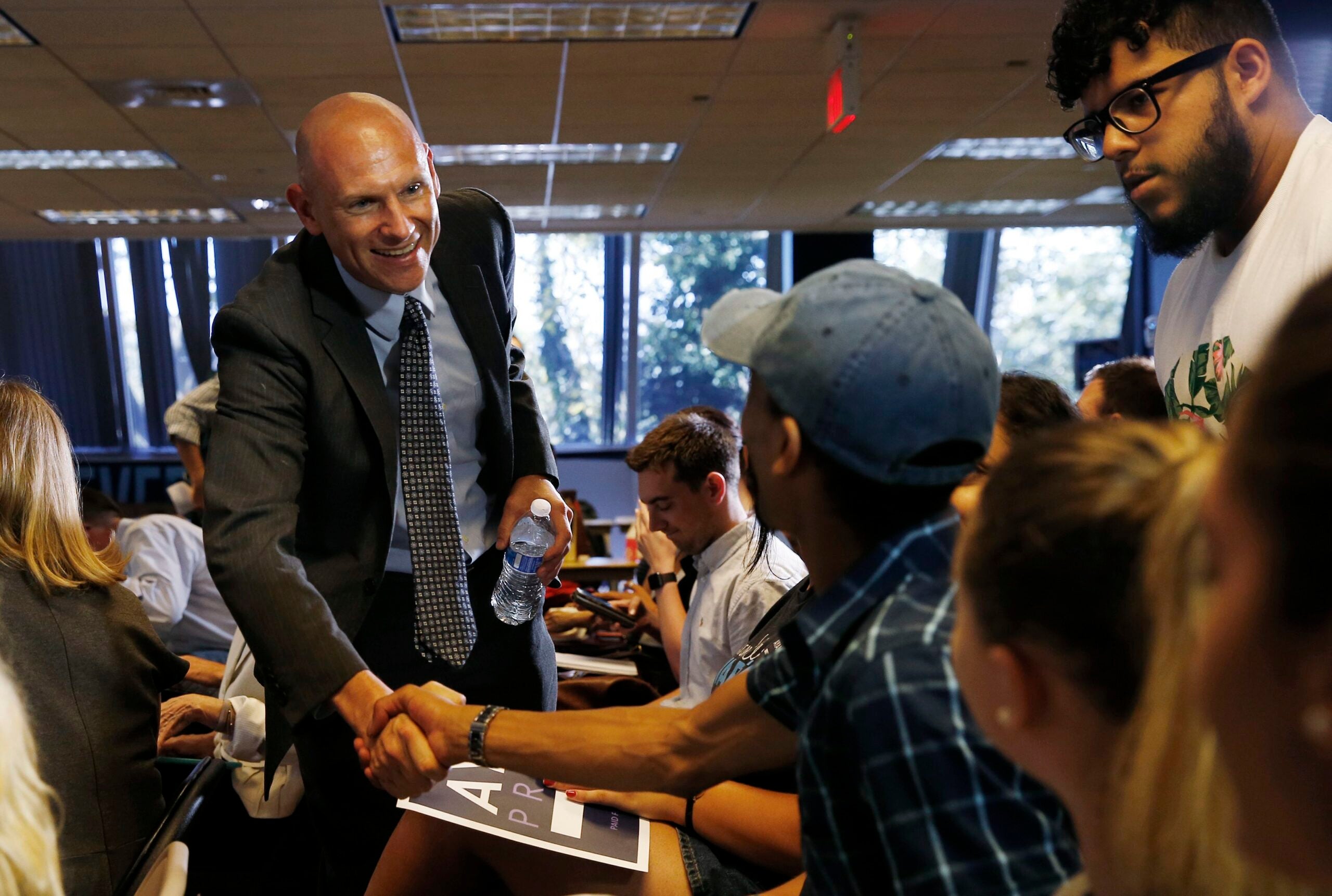 Quentin Palfrey, one of three candidates in the Democratic primary for Massachusetts attorney general, wants Beacon Hill to limit the influence of big financial donors on state policy.

In a Boston.com exclusive on Thursday, Palfrey called on state lawmakers to address a variety of campaign finance reform issues, citing his own primary race as a strong example of what needs to change.

“This election is a textbook case of what is wrong with our campaign finance system,” Palfrey said in a statement. “With wealthy candidates self-funding multi-million dollar ad campaigns and corporate special interest donors polluting our campaigns through super PACs, big donors have too much power on Beacon Hill and special interest money threatens drown out grassroots voices in our elections.”

Palfrey, a former assistant attorney general, was highly critical of campaign finance practices throughout the run leading up to the Sept. 6 primaries.

Most recently, on Tuesday, his campaign released its first television ad, with a byline from Palfrey saying, “The Attorney General’s office is not for sale.”

He called on his opponents, labor lawyer Shannon Liss-Riordan and former Boston City Councilwoman Andrea Campbell, to sign a “people’s pledge” – a campaign finance deal meant to curtail the influence of super PACs. during an election.

Liss-Riordan has poured about $3 million of his own money into his campaign, with the vast majority of that total making its way into his war chest in the past month.

Still, she and Palfrey both swore off corporate donations, while Campbell did not sign the pledge.

Palfrey has repeatedly accused Campbell of taking money from super PACs. Campbell, in a debate earlier this month, insisted she only took one, the Environmental League of Massachusetts Action Fund.

According to the state’s latest campaign finance documents, Campbell finished last month with the highest balance of the trio, with $691,526 on hand. Liss-Riordan grossed $494,352, while Palfrey brought in $335,606.

“Some of these specifics are a reaction to the spending we’re seeing and the donations we’re seeing happening in real time, but the problem has been with us all campaign,” Palfrey said in an interview.

Through the public funding system, originally created in 1975, candidates for various positions, including the Attorney General, are allowed to receive matching public funds for their campaigns if they agree to meet statutory spending limits and increase the thresholds for eligible contributions.

Palfrey calls for the expansion of this system, so that all candidates who agree to limit their spending can be better equipped to “counter the effect of multimillion-dollar self-funded candidates and corporate super PACs.”

In the current election cycle, this system is only available to Palfrey and Democratic Lieutenant Governor candidate Tami Gouveia.

Palfrey said this system should be available to any candidate running a “clean election” campaign, particularly if running against candidates who are largely self-funding or who are backed by super PACs from ‘company.

Applicants are prohibited from coordinating directly with super PACs. But in red boxes, typically found in the “Media Center” or “Media Resources” sections of campaign websites, candidates lay out information they want to amplify with messages or details about their opponents. they wish to publicize. In turn, super PACs know exactly where to look for guidelines.

The practice is becoming increasingly popular in races across the country.

Last week, Palfrey called out Campbell’s campaign for appearing to use the tactic.

“It’s a bad practice, it may already be breaking the law, but I think the legislature should make it clear that it’s not a permitted practice,” Palfrey said.

Third on Palfrey’s wish list is a crackdown on super PACs who receive so-called “dark money,” political spending by 501(c)(4) nonprofits that are not not required to disclose their donors. A current loophole exists to allow Massachusetts campaigns to reap the benefits of unlimited, undisclosed donations, Palfrey said.

The solution? Palfrey thinks Massachusetts should follow other states and get “long arm status” on the books.

Essentially, the laws say “if you’re going to put money into a super PAC from a dark money source, that triggers a disclosure requirement,” Palfrey said.

“If you want the attorney general to be the people’s advocate and go after big business…you can’t also have these big corporations fund AG-supporting superPACs,” he said.

Asked if he’s optimistic lawmakers can tackle these issues, Palrey said he believes the Legislative Assembly “has the power to make our elections free and fair.”

“This poses a major threat to our democracy, and I think the Legislative Assembly should take campaign finance seriously,” he said. “People understand how dangerous corporate money is in our elections and how skewed our elections have become since Citizens United. They should look at this campaign and other campaigns going on right now in Massachusetts and realize that we have a lot of work to do to clean up the electoral system.

Stay up to date on all the latest news from Boston.com